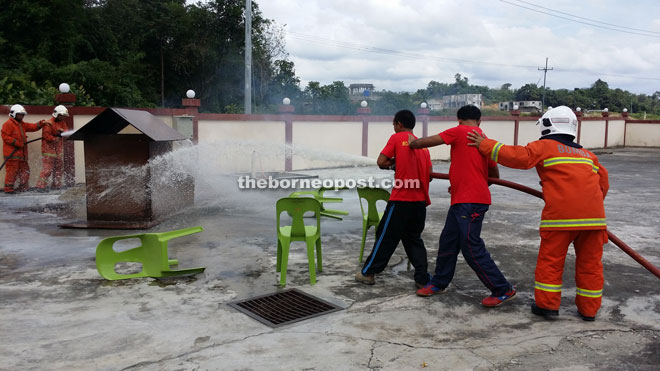 Members of the Bomba Community try to put out a fire in this demonstration.

KUCHING: The state Fire and Rescue Department had targeted 270 Bomba Community units to be set up in the state this year to assist them in fire-fighting and fire-prevention.

Its director general Datuk Wira Wan Mohd Nor Ibrahim said as of now only 78 of such units had been set up in the state, especially at rural villages located some distance from the nearest fire stations.

“These units play important role as they will be the first people to be at the fire scene because they live around the area,” he said, adding he was confident they would achieve the 270-unit target by end of this year.

“We hope that by next year there will be over 300 of such units across the state,” he told reporters after closing a Bomba Community Course for N2 Tasik Biru at Redeems Centre in Bau yesterday.

Earlier at the event, Wan Mohd praised the participants for their high spirit and described them as an eager and committed lot wanting to learn about fire-safety and fire-fighting techniques.

“I understand that many villages and longhouses in the state are equipped with fire extinguishers and other fire-fighting equipment but most residents do not know how to operate them in the event of a fire. With trained individuals from the Bomba community, they can assist and guide their fellow villagers to prevent or fight longhouse fires,” said Wan Mohd Nor.

He added that most fires were caused by human negligence and could be avoided if the people practised early precaution and prioritised safety.

The two-day course was attended by 100 individuals from 10 villages in the Tasik Biru constituency. State Bomba director Nor Hisham Mohammad was among those at the closing ceremony.