Thursday, February 2
You are at:Home»News»Sabah»Bosses face action for not remitting tax deductions
For the freshest news, join The Borneo Post's Telegram Channel and The Borneo Post on Newswav. 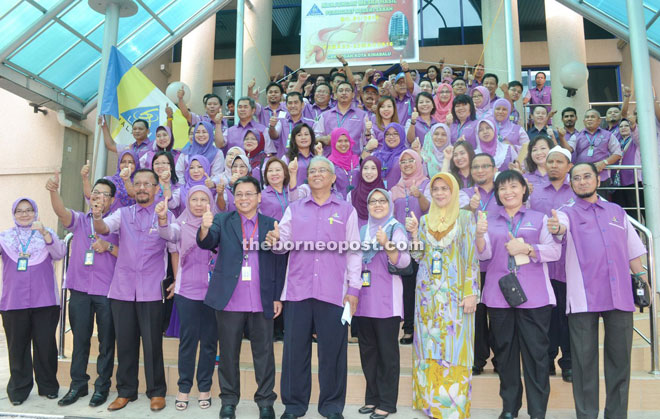 KOTA KINABALU: Employers who fail to remit schedular tax deductions (STD) of their employees to the Inland Revenue Board of Malaysia (LHDN) will be hauled to court.

LHDN Kota Kinabalu branch director Suhaili Sudin said three cases were being processed in order to be brought to court this year.

He said the three cases consisted of repeat and first-time offenders.

“If convicted, they (employers) will realize and be aware that this is a serious offence.”

Suhaili said LHDN had issued compound for seven cases under the offence last year but later found that the compound, ranging from a minimum of RM200 to maximum RM2,000, was insufficient.

“This is serious because employees thought that a portion of their salary goes to LHDN when in fact, the employers fail to remit the STD.”

He said that to the media after when he represented the LHDN Sabah director Hj Kamaruzzaman bin Hj A.B. Salleh in officiating at the state-level Kunjungan Mesra Hasil (KMH) here yesterday.

Suhaili said the KMH, which was held on March 22 and 23 in Kota Kinabalu, was to promote awareness among taxpayers about their responsibilities, regulations and taxation laws.

He said a total of 213 notices on outstanding tax for 2015 would be served to individuals and companies, adding that some of the outstanding tax had not been settled for three years or longer.

“We want taxpayers to settle (the outstanding tax) to avoid being taken action such as being brought to court.”

On another matter, Suhaili said the LHDN Kota Kinabalu branch had received 3,260 appeals for the 1Malaysia People’s Aid (BR1M) as of Tuesday.

“They made the appeal because some of their data are incomplete, while some information do not match with that of the National Registration Department,” he said.

KMH will also be held at Sandakan in April, Tawau in May, Keningau in July and Labuan in August.

Meanwhile, Kamaruzzaman said KMH was an activity to help LHDN in achieving its target of tax revenue set by the Finance Ministry.

For instance, he said the business census visit enabled LHDN officers to inform taxpayers on their duty and responsibility in tax affairs.

He said visit to employers’ premises was significant because LHDN was concerned about employers who violated STD.

“There are some employers who have made deductions from their workers but did not remit the payment to LHDN.

“Therefore, such visits is a good platform to inform employers that LHDN will not compromise in these cases and stern action will be taken,” Kamaruzzaman stated in his speech which was delivered by Suhaili.

He said some taxpayers did not know they had outstanding tax to be settled as they had not updated their mailing address, and thus were prohibited from leaving the country.

“Hence, the opportunity to meet with taxpayers during business census visits and delivery of tax documents, especially notice on outstanding tax, will create awareness to taxpayers that tax is a responsibility, not a burden.”