Wednesday, August 17
You are at:Home»News»Sarawak»Dr Patau laid to rest at SDA cemetery in Bau 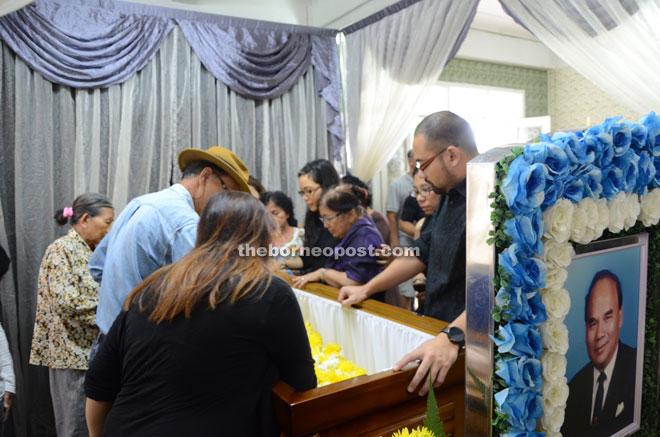 Dr Patau’s family members pay their last respects to him. Also seen is Sean (right), and his second right, Teresita.

was yesterday accorded a traditional Bidayuh funeral service and rites before his cortege left his residence at Jalan Batu Kawah.

Dr Patau was the founder and first president of State Reform Party (STAR).

He was laid to rest at Seventh Day Adventist (SDA) cemetery at Kampung Kaman, Krokong, Bau.

Earlier before the burial service and before his coffin was carried to the hearse, Dr Patau was given a ‘Gawea Morih’, a ceremony to prepare for his ‘Going Home’ to another world.

According to STAR party member Alim Mideh, when a man of Dr Patau’s status passed away, in Bidayuh pagan belief the

person “is not dead but instead is sleeping and going home to another world where he will live in eternity”.

“This ritual ceremony is for special persons like Dr Patau because in the Bidayuh culture and pagan belief, he is a priest of the second highest order called the ‘Pinyigar’.

in the Bidayuh pagan belief and would have been called ‘Pinguguah’. The ceremony is to make sure the god ‘Dewa’ is happy and hopefully his journey will

be peaceful,” Alim said when met by reporters at the funeral service.

During the ceremony, a shaman and priest of the highest order or the ’Pinuguah’ brought some

of Patau’s possessions like his books, medical equipment, his fruit and herb saplings to be placed inside a symbolic woven basket, bags and jars.

An animal was slaughtered as sacrifice and its blood used to smear a jar as symbolic gesture to please the pagan god and give the dead a safe journey to another world.

After the ceremony, Dr Patau’s son Sean Patau, the youngest of the three siblings, read his father’s eulogy and said his father was a man who cared about others and his family rather himself first.

He said his untimely death was a shock to his family and friends, the Bidayuh community in Bau and elsewhere including his political allies.

“My late father shared many things with me and family and one of the quotes that stick in my mind is ‘Son, never be a great man but be a good one,” he recalled.

Tajem, who was his party comrade in Sarawak National Party before he (Tajem) formed Parti Bansa Dayak Sarawak with Tan Sri Datuk Leo Moggie in 1983, said Dr Patau will always be remembered as one of the great Bidayuh leaders who ever lived and a man who stuck to his principles and personal beliefs.

Dr Patau who graduated in Medicine from University of Ottawa in Canada recently promoted herbal medicine and in the last 10 years he was a firm believer in traditional healing like his late father did.

He worked with his fellow countryman in Gumbang-Tringgus-Krokong region in Bau finding herbs for all sorts of cures including the cure for cancer.

After the burial, another ceremony called ‘Gawea Selaman’ was held to appease the god and bid farewell and pay last respects to the late Dr Patau.