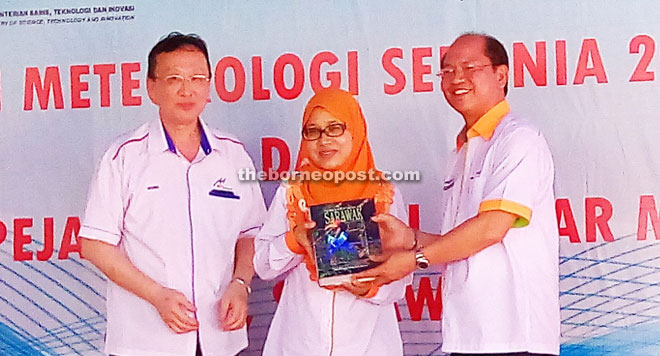 Madius (right) receiving a book on Sarawak from Che Gayah as a memento as Wong (left) looks on.

MIRI: The Ministry of Science, Technology and Innovation (Mosti) is worried about the declining number of students taking up science subjects, which is only 20 per cent.

The number of students doing science subject nationwide is too low.

As such, said its minister Datuk Seri Panglima Madius Tangau, the ministry will work together with parents, teachers and government agencies to promote science subjects and make science a culture.

“The number of students taking science has dropped to only 20 per cent nationwide even though out target is 60 per cent by year 2020.

“This rate is worrying and if this continues, in future we will have insufficient experts in science to provide services in science-related industries and agencies, including Mosti,” he said.

He was speaking at the launch of World Meteorology Day 2016 and Miri Meteorology Office and Meteorology Radar Station at Miri Airport Road yesterday.

Madius said the effort to promote science among students had to start from the school all the way to higher education, including among government staff.

Among the measures, he added, was to encourage the establishment of more science-related industries.

“We encourage more science-related industries to create job opportunities for our science graduates by providing assistance to the companies to infuse the usage of science in their projects.

He added that science graduates had a bright future.

“With knowledge in science, technology and innovation, you can become entrepreneurs and the person that creates science-related job opportunities,” he said.