Thursday, August 6
You are at:Home»News»Sarawak»‘Politics in semi-urban areas full of spices’ 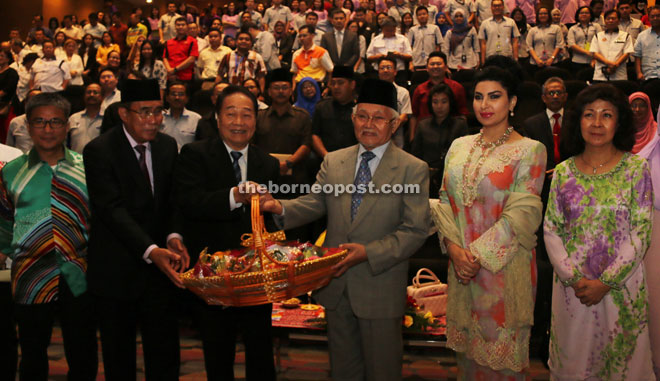 Wong (third from left) presents a memento to Taib while (from left) Dr Annuar, Len Talif, Raghad, Leong and others look on.

SIBU: Head of State Tun Pehin Sri Abdul Taib Mahmud pointed out yesterday that politics in semi-urban areas is always full of `spices’ and that many problems faced by the Chinese community need to be sorted out.

“When it is done, I think the opposition will find that they will not be able to attract their protest votes to win,” he said during his working visit to University College of Technology Sarawak (UCTS).

“They have to work hard and change their style of politics to suit the situation in the country,” he said of Chinese politicians.

“I think that will take place as soon as the Chinese leadership problem is sorted out in the future.

“Something that is not easy when there is a demand for a new team to bring in new programmes and to keep the confidence of the people on the ground,” he added.

Taib said he hoped to see in the future no quarrel over leadership in Sarawak and no quarrel among the parties in Barisan Nasional.

He noted there were still quarrels between the opposition and BN, but they were much ‘cooler’ than their quarrels in the past.

Taib, who is also the chancellor of UCTS, said Sarawak enjoyed a stable government under the leadership of Chief Minister Datuk Patinggi Tan Sri Adenan Satem, and because of the stability, people currently could take the state election very quietly and calmly.

However, he said he would not know when the state election would be held as he was only a governor.

“I do not know as I am only a governor now. Leave the election to you people – the politicians,” he said.

He said he looked towards the future of Sarawak with greater confidence that the state could achieve its potential.

“Sarawak is in your hands today, and it is a bit in my hand, but I am sure that the potential is big so that the children will take pride for being Sarawakians,” he enthused.

According to Taib, Sarawak is now occupying a leading position in Malaysia because of the struggles that the state experienced over the past few years.