Wednesday, February 1
You are at:Home»News»Sabah»Rescued sun bear cub settles into new home
For the freshest news, join The Borneo Post's Telegram Channel and The Borneo Post on Newswav. 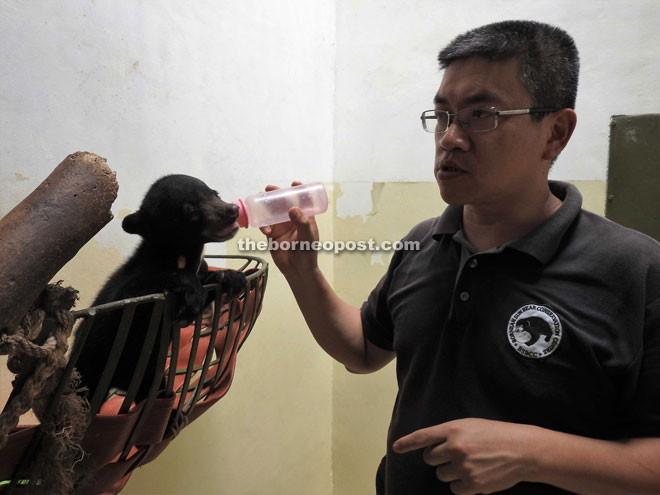 SANDAKAN: A female sun bear cub found alone in a forest reserve in Penangah, Telupid has settled into her new home at the Bornean Sun Bear Conservation Centre (BSBCC), here.

The cub, estimated to be about two months old and named “Wawa” by the Sabah Wildlife Department (SWD) officer who drove her to the centre last Friday,is currently under quarantine and is reported to be improving in terms of her health.

The workers subsequently took the cub to the office of the Forest Management Unit (FMU) 16, where she spent the night before being surrendered to the SWD which then took her to the Lok Kawi Wildlife Park near Kota Kinabalu the following day.

“Based on details given to us, Wawa appeared to be weak when she was found and those who brought her to safety decided it would be best to only give her some water to drink.

“After several days, she arrived at BSBCC and although she was exhausted from the long six-hour drive, she was feisty enough to bark at our staff.

“Wawa is still weak and dehydrated but she is adapting well. We have been giving her constant care and we hope that she will become stronger in the days to come,” Wong said in a press release.

He added that it was very unlikely for a sun bear to abandon her cub and that it was not known what had happened to Wawa’s mother.

“BSBCC is taking up the challenge to raise this bear and to teach her all that she needs to know before she returns to her natural habitat as an adult,” he said, adding that this is the 48th rescued sun bear to have arrived at the centre.

He reiterated that it is an offence under the Sabah Wildlife Conservation Enactment to hunt or to keep Sun bears.

SWD Director ,William Baya said while he was glad that Wawa had made it safely to BSBCC, the fact that she was found alone was worrying.

He said orphans were rescued and sent to BSBCC from time to time, indicating that their mother might have been killed for their parts as part of an illegal trade business.

“There are no medicinal values of consuming Sun bear parts. Our department would like to issue a stern warning to those who continue to poach sun bears and other protected wildlife species.

“We will take action against those who are found to be involved in such activities. Offenders may face penalty of up to five years’ jail term or a maximum of RM50,000 fine, or both,” he said.

The cost of caring for Sun bears that end up at BSBCC is huge and the centre is appealing for public support through donations or by adopting bears.