Friday, June 25
You are at:Home»Columns»Perspective»Can we think? 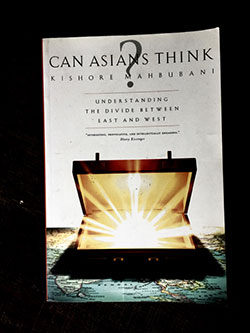 A FRIEND from Hong Kong sent me a book with the provocative title ‘Can Asians think?’ It is written by one Kishore Mahbubani, a former Singapore diplomat and now a professor no less. So insulted was I that I couldn’t be bothered to read the book.

Then I came across such headlines as ‘Graduates these days are lacking critical thinking skills’. This is according to Johan Mahmood Merican, the CEO of TalentCorp. This corporation was established in 2011 under the Prime Minister’s Department. One of its main missions is to reach out and attract Malaysian graduates and experienced professionals overseas to seek opportunities back home. So its task is to persuade those Malaysians who have left the nest seeking greener pastures abroad to balik kampung.

In fact this idea of our inadequacy has been floating around for some years. In 2012, a national newspaper published a piece that said, “Graduates emerging from the Malaysian education system fail to meet the expectations of prospective employers due to a lack of critical thinking skills and poor communication. This has resulted in six out of 10 graduates from Malaysian universities taking as much as six months to find a job. The other 40 per cent take even longer.”

Last week I was asked to give a talk on ‘Critical thinking skills’ and so I started to look into the subject of critical thinking among Malaysians. From my cursory survey it appears that there is some truth in the assertion that ‘we can’t think’. How else can we explain the fact (just to take one example) that we tacitly agree that it is not illogical to unleash the full might of all the national investigative agencies onto one man who appears to have received the gift of a discount on a house that he purchased while ignoring another who has mysteriously received a monetary gift of a thousandfold the value of the said house.

Can’t we really think or is it that we don’t dare to think. The late Pete Seeger (1919 to 2014), an American folk singer and social activist, used to sing “Die Gedanken Sind Frei” which means, “My thoughts are free”. Well, he did not live in this neck of the woods, did he? I am aware that as writers here we have to be very wary of our own thoughts. For health reasons, it is best to keep many of them between our two ears. There is a phalanx of laws that can see us behind bars and/or our publishers losing their licence to publish.

We don’t think (critically) because we have been conditioned for at least a century to emaciate ourselves intellectually. During the colonial days, it was drummed into our parents’ heads that they didn’t have to think or question too much. “Leave that to the masters (colonial)” they were told. Though we did achieve independence, it appears that we did not quite acquire the independence of thought. The regime that took over from the British colonialists ensures that the habit of leaving thinking to the government continues. It is as one social activist put it, “We have been bonsified intellectually.” I presume he means that our minds have been stunted like the bonsai plant.

One of the effects of the bonsification is that we begin to doubt our own ability for discernment. We readily bow down mentally to those whom we perceive as of higher authority, like a government minister. I have sat in meetings where points put forward by some ministers were accepted without examination of their merit. “Well, Datuk said it, so it must be all right,” is the pat response. The weird thing is that some of these ministers, having been lauded by their minions for so long, begin to believe in their own intellectual prowess. Emboldened, they begin to shoot off their mouths. Now, not a week passes without some minister or other making less than intelligent statements.

If one half of our thinking faculty has been stymied by our deference to worldly authority, the other half has been surrendered to our God or gods. A few years ago I read in a newspaper about one man who found a ‘magic’ stone in Kuantan. The rock floats and the finder claimed that it has healing properties, and he said that a faith healer wanted to buy it from him for RM10,000 but he refused to part with it.

It is also reported that in India, every day hundreds of devotees make the pilgrimage to the ancient Rameshwaram to pray before a couple of floating stones that they believe are part of the bridge built by the deity Lord Rama to cross over from India to the island of Sri Lanka.

Had these believers done some research, they would have found out that the floating stones are pumice stones, a type of volcanic rock that is full of tiny air pockets making it very low in density. This is because they were formed from airborne frothy magma. As the magma cooled rapidly, it solidified into rock and at the same time trapping the gas in tiny pockets. The fact that they float has nothing to do with magical or divine properties. It is because they are less dense than water of the same volume thereby giving them positive buoyancy.

Too easily do we ascribe to the divine what could be an explainable phenomenon. Recently we had a spate of flooding in Kuching and some people said that it was because God was angry. Really? Could it be because our drainage was not adequate?

The title of Professor Kishore’s book is indeed provocative. On the one hand we don’t think because we have surrendered that power to the Divine and to men perceived to be of higher authority, on the other hand we don’t think because we would not dare to think for fear that it might lead us to rather dicey situations. These are the shackles that hold us down. Unless we dare to break them, I am afraid we just have to eat humble pie and agree with the good professor.