Wednesday, December 1
You are at:Home»News»Nation»Seven killed, two hurt in van-lorry crash in Johor 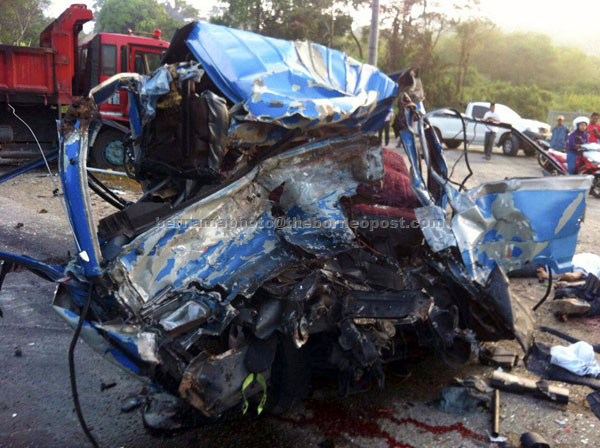 The badly damaged van in the crash that killed seven and injured two more. — Bernama photo

Johor Fire and Rescue Department assistant director (Operation) Mohd Rizal Buang said three men and four women were killed while two others were hurt in the  6am accident.

“It is learnt that eight of the victims were from the van while another was the lorry driver,” he said in a statement here, yesterday.

Meanwhile, Kulai District police chief Supt Razak Md Said said the accident took place after the van driver lost control of the vehicle at a bend and entered the opposite lane, colliding head-on with the lorry.

He said another van passenger, Nor Saila Mohd Nor, died at the Kulai Hospital, adding that post-mortems on the deceased were done at the same hospital.