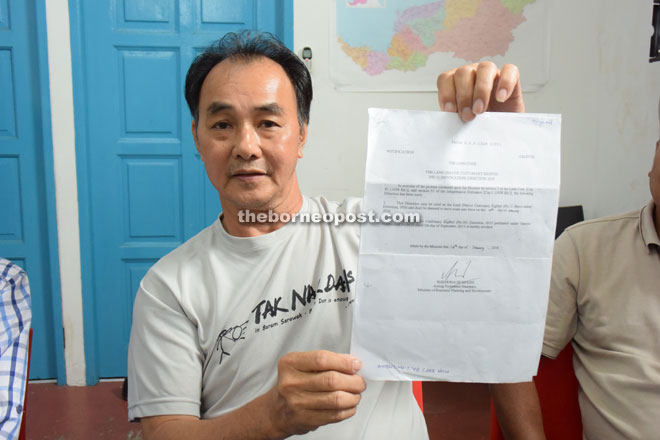 Jau shows the notification on the revocation of the gazettes of the extinguishment of NCR land for the Baram dam project.

KUCHING: Baram Protection Action Committee (BPAC) has called on the state government to make a public statement on the revocation of the gazettes of the extinguishment of native customary rights (NCR) land for the Baram Dam project and cancellation of the project.

Its chairman, Philip Jau, who received the notification on the revocation and cancellation of the Baram dam, said a public statement by the state government was necessary because the people, especially those in Baram, were not aware of the revocation.

“I’m also still very concerned on the sincerity on the part of the government as the situation on the ground does not perceive it to be as logging activities which are still actively ongoing.

“We sincerely hope the revocation and cancellation of the Baram dam project is not a political gimmick since the state election is just around the corner,” he told a press conference here yesterday.

Jau also called on the state government and Sarawak Energy Bhd (SEB) to give an assurance that the Baram Dam project would be cancelled indefinitely, and also to cancel other planned mega dam projects in the state.

“We are concerned that if all the dams were to be built, it will bring devastating impacts and tragedies to our people and our lives, especially our lands, forests, rivers, environment, ecosystem, flora and fauna and biodiversity.”

He also urged the state government to revoke all leases over their NCR land for oil palm plantations and planted forests as well as timber and quarry concessions in their area.

“We also want the state government and SEB to withdraw all court summonses and appeals over our NCR land without conditions. We would also like to call upon the government to officially recognise our communal boundaries (pemakai menua concept).”

Jau said the people of Baram were not against development and progress but the government must seek their consent first in whatever they wanted to do.

BPAC would like to thank individuals, organisations, non-governmental organisations (NGOs), churches and political parties which have supported the people of Baram throughout their long years of struggle against the dam project.

In conjunction with the revocation and cancellation of the Baram Dam, Jau said BPAC would be holding a thanksgiving dinner on April 9 (from 5,30pm to 11pm) at Students Corner in Miri (opposite Park City Hotel). All are invited to join them.