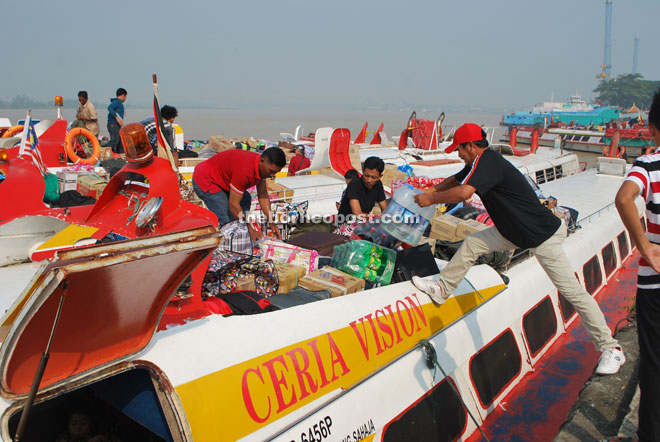 File photo showing goods being placed on the roof top of an express boat.

SRB controller William Jinep disclosed that the recommendations had been forwarded to Marine Department.

“All exit/entry doors are to be of sliding type to replace the ‘push up opening type’ and the roof top emergency exits.

“SRB has come up with extra safety features for passenger express boats to strengthen safety measures.

“We will hold discussion with the Marine Department on how to implement them,” Jinep told The Borneo Post yesterday.

He also explained that it was not practical to construct safety rails on the gunwale or side deck of the boat as this would be constantly damaged due to the boat-to-boat contact.

The controller pointed out that safety rails are constructed on the roof side of express boats for passengers to hold when embarking or disembarking.

He also said the design and construction of boats were not under their purview but under Marine Department.

He was reacting to a suggestion in the media that safety of express boats be improved.

Thus, he urged them to take necessary precautions when embarking and disembarking from express boats.

He said priority should be given to the elderly and young children who must be accompanied by their parents when disembarking.

“Safety requires a concerted effort and everybody has a role to play,” stressed Chan.

On the ‘Qing Ming’ Festival which falls on April 4, he said stringent safety measures had been put in place.