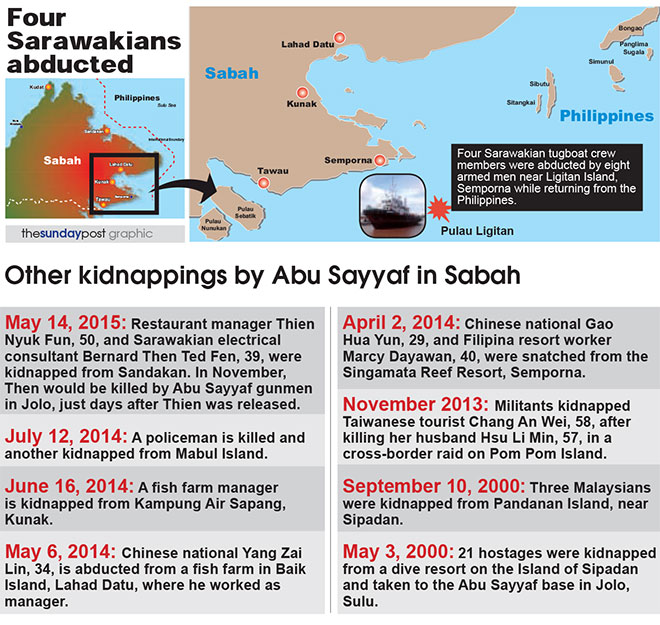 KOTA KINABALU: The authorities have yet to receive  ransom demand for the four Sarawakian tugboat crew members kidnapped by armed men, believed to be Abu Sayyaf militants from the Southern Philippines, on Friday near Ligitan Island, Semporna, in Sabah.

Bernama quoted Inspector-general of police Tan Sri Khalid Abu Bakar as saying the police were still determining whether the abduction was a cross border crime.

“We are still investigating if the abduction involved the Abu Sayyaf group,” he said.

He said such activities made it difficult for the security forces to monitor the area more extensively.

Tugboat crew members Wong Teck Kang, 31; Wong Hung Sing, 34; Wong Teck Chii, 29; and Johnny Lau Jung Hien, 21; — all from Sibu — were travelling from Manila in the Philippines towards Tawau, Sabah, when they were intercepted by a speedboat carrying eight men.

“The captain of the tugboat then headed to the nearest police station to lodge a report on the abduction.”

Abdul Rashid said police investigators and those from the Eastern Sabah Security Command (Esscom) have interviewed the captain of the tugboat to establish the actual location where the abduction occurred.

“We cannot jump to conclusions and say it occurred in our waters. It could have happened in international waters, but since the tugboat was on its way to Tawau, the captain lodged the report at the nearest police station,” he said.

“The abduction was said to have happened in Ligitan area but that is a vast place and we have our assets in place there. I am now waiting for the investigation report on whether the abduction happened in Sabah or international waters. We have to see the tugboat’s log, and if there is a GPS (global positioning system), we will be able to determine where it happened.”

Abd Rashid said Esscom, with the assistance of all security forces, has tightened security along Sabah’s borders and thwarted several attempts by would-be abductors to sneak into Sabah.

According to him, the tight security has led group(s) involved in abduction cases to pick “easy” targets, such as an Indonesian tugboat in waters off southern Philippines on March 26.

“They are changing their trend to abducting easy targets near the borders,” he said.

Meanwhile, the shipping company manager filed a police report at the Miri Central police station around 12am yesterday after being alerted by a branch manager in Tawau on the incident.

It is understood that the shipping company is based in Miri.

After several attempts, thesundaypost managed to contact a manager, who only wished to be identified as Tan.

“I’m sorry, I cannot provide any details on the incident as a police report has been filed and we’ll let the authorities investigate the matter,” she said.

Tan added she hoped all four crew members are safe.

She declined to comment further and requested the media respect the privacy of victims’ family members during this difficult time.

It is understood that the tugboat was returning to Tawau for transit expenditures after sending a shipment of coal to Manila from Samarinda, Indonesia. 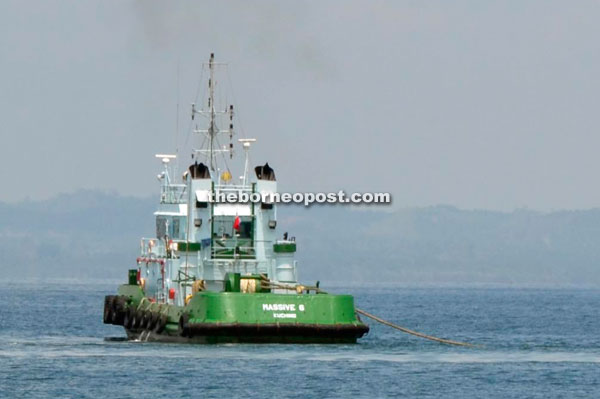 A file photo of the tugboat.