Saturday, July 11
You are at:Home»News»Sabah»3D mapping to decide on land use 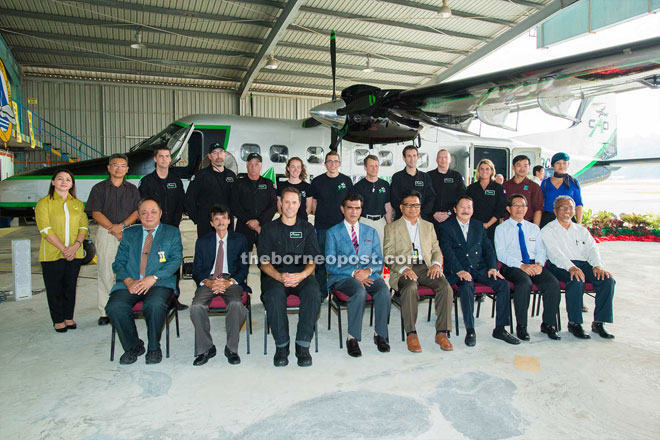 Sam (seated fourth from left) with representatives from other government agencies, Layang-Layang Aerospace Sdn Bhd and the CAO team.

KOTA KINABALU: A mapping campaign using scientifically advanced technology took off on April 4 this year in Sabah to gather data that will feed into making the best decisions for land use and management of the state’s biodiversity.

Carried out by the Carnegie Airborne Observatory (CAO), a facility under the Department of Global Ecology, Carnegie Institution for Science in Stanford University, the high resolution and three dimensional mapping will provide a good understanding of the structure and quality of Sabah’s forests, carbon stocks and biodiversity patterns – and help with conservation and restoration decisions.

This mapping process will provide government decision makers, scientists and conservationists an understanding on how past environmental management decisions have impacted the land and biodiversity, and how current and future decisions can make their status better.

The maps will also set a baseline against which land and biodiversity management can be assessed in the coming years.

The CAO aircraft is scheduled to collect data until early May 2016 as part of a partnership between CAO and the Sabah government through the Sabah Forestry Department (SFD).

The partnership was initiated and facilitated by Forever Sabah.

Sabah Forestry Department director Datuk Sam Mannan was quoted as saying, the maps derived from this campaign, unlike past experiences where such maps were viewed as “treasure maps”, will be a useful tool for making sound decisions in relation to land-use planning in the State, especially now that the State Government has twomajor 10-year goals.

By 2025, the State is expected to increase its current 24% of Totally Protected Areas (TPAs) to 30%, and to achieve 100% Certified Sustainable Palm Oil (CSPO) for all palm oil growers in Sabah.

The mapping exercise is sponsored by a wide alliance of organisations such as SFD, the United Nations Development Programme – Global Environment Facility (UNDP-GEF) through the biodiversity conservation in multiple use forest landscapes project, Roundtable on Sustainable Palm Oil (RSPO), WWF-Malaysia, Federal Natural Resources and Environment Ministry through the Heart of Borneo (HoB) initiative, and Danum Valley Management Committee.

Both the UNDP-GEF funded project and HoB are implemented by SFD. A technical committee comprising government agencies, non-governmental organisations and research bodies is guiding and supporting the campaign.

From 2008 to 2013, CAO has operated in Colombia, Costa Rica, Panama, Peru and South Africa, providing support to private and public institutions working to save endangered wildlife and highly diverse ecosystems.

The CAO programme has produced over 150 scientific publications and has been at the centre stage in the United Nations climate change and biodiversity negotiations.

CAO director Dr Gregory P. Asner said his team was delighted to be working in Sabah with partners from SFD and a supportive group of government, NGO and academic institutions based in the state.

“Our goal is to map the structure, biomass and biodiversity of Sabah’s unique ecosystems, especially its remaining forests and wetlands. It is going to be a real challenge given the typically cloudy skies over this part of the world, but I am optimistic that we will get it done.

“Our goal is to provide highly accurate and actionable maps to all parties interested in advancing Sabah’s environmental conservation, management and resource policy,” Asner said.

At the end of the campaign, data will be processed and analysed at Carnegie Institution’s Department of Global Ecology in Stanford, California.

This will be done in collaboration with scientists, conservationists and land managers in Sabah, and will use field data currently available locally for calibration and validation of CAO maps.

The final maps are expected to be ready by the end of the year and will be shared with the relevant organisations in a transparent and open-access approach.