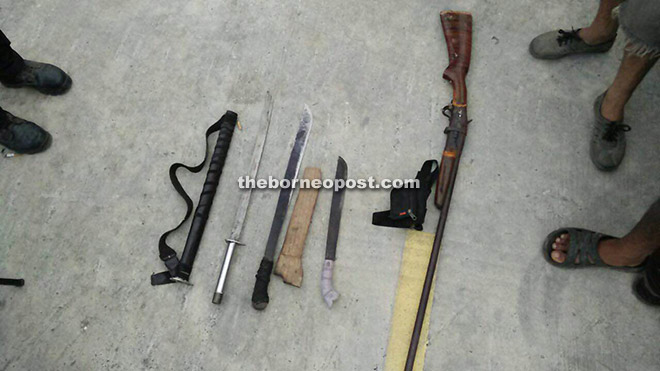 The weapons and bakakuk seized during the operation.

KINABATANGAN: Three men were caught with a bakakuk (homemade gun) and three live bullets in a pick-up truck during an operation to detain illegal immigrants here yesterday.

According to Kinabatangan Police Chief Supt A Sahak Rahmat, the men were brought to the Kinabatangan police headquarters for further investigation.

During the operation, a total of 34 suspects aged 12 to 51 were arrested.

Twenty five men and nine women of different races were nabbed when 35 shared houses here were raided by the enforcement personnel consisting of the police, immigration officers and Eastern Sabah Security Command (ESSCom).

Those arrested were brought to Sibuga Temporary Detention Centre, Sandakan for further investigation.