Tuesday, February 7
You are at:Home»News»Sarawak»Over RM3 bln spent to develop SMEs
For the freshest news, join The Borneo Post's Telegram Channel and The Borneo Post on Newswav. 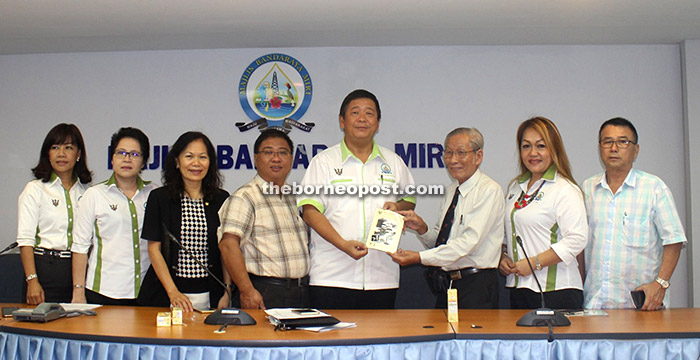 Awang Tengah (fifth right), flanked by Naroden on his right and Asfia, hands over a mock cheque for RM50,000 to a representative of Kumpulan Wang Amanah Pembangunan (KWAP) of the Cooperatives Commission of Malaysia after the opening ceremony.

SIMUNJAN: The government had spent more than RM3 billion to develop over 7,300 hectares of land slated for small and medium scale enterprises (SMEs) across the state.

According to Industrial Development Minister Datuk Amar Awang Tengah Ali Hasan, the amount does not include the 8,800 hectares of industrial land in Samalaju set aside for energy-intensive industries, and 77,000 hectares for the halal hub sector.

He added that the government had also provided various financial and non-financial facilities to assist SMEs, as well as incentives to further spur the growth of micro-entrepreneurship.

“SMEs play a vital role in the state’s economic growth in that almost all business entities in Malaysia comprise those under this sector. SMEs also exhibit positive annual average growth rate of 8.6 per cent, against that of the nation’s economy at 5.4 per cent.

“Moreover under 11th Malaysia Plan (11MP), the government intends to develop more industrial parks across the state’s rural districts such as Lundu, Betong, Sri Aman, Sebuyau, Marudi, Kapit, Bau dan parts of Sibu — in line with its focus on rural development,” he said in officiating at the opening of Gedong Entrepreneurs and Consumers Carnival 2016 at Gedong public hall here yesterday.

Additionally Awang Tengah, who is also Public Utilities Minister, pointed out that that the state had managed to attract many foreign investments over the past several years.

In 2013, he added, Sarawak drew in total investments worth RM8.27 billion — placing it behind Johor with RM14.4 billion and Selangor, RM9.8 billion, as among the states with the highest number of foreign investments.

The government targets SMEs to add to the nation’s Gross Domestic Product (GDP), human capital and export market by 2020.

Meanwhile, Domestic Trade, Cooperatives and Consumerism Minister Datuk Seri Hamzah Zainuddin disclosed that his ministry, via Perbadanan Nasional Bhd (PNS), would be eyeing a healthy growth in the number of businesses through the Transformation in Business (BIT) programme.

According to him, BIT should be the most viable platform for entrepreneurs to expand their business via franchising — adding that currently, there are three BIT entrepreneurs in Sarawak.

“We are targeting another three to participate in BIT and under PNS, a total of 20 franchise (holders) in Sarawak have been allocated with funding for the programme,” said Hamzah, whose text of speech was read by the ministry’s secretary-general Datuk Seri Jamil Salleh Zainuddin

Hamzah said it was the responsibility of his ministry to assist the people, especially in addressing the ongoing rise in cost of living.

“Therefore, we do hope that this programme could assist those from the middle and lower income brackets, with various incentives and assistance available for their business.”

The Gedong Entrepreneurs and Consumers Carnival 2016 marked the second of its kind to be held in the state after Lawas.