Monday, August 15
You are at:Home»News»Sarawak»Programme to address threat of rising sea levels 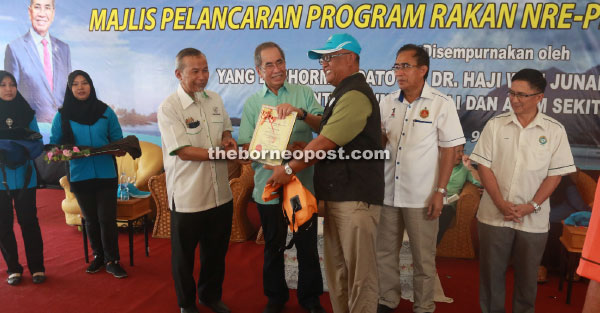 Wan Junaidi (second left) presents a certificate to a programme participant. Len is at second right while at right is Natural Resources and Environment Board (NREB) controller Peter Sawal.

KUCHING: A Ministry of Natural Resources and Environment (NRE) landmark programme will address the growing threat of rising sea levels.

‘Rakan NRE-Sea Level Rising’ is a follow-up to an NRE 2010 study through the National Hydraulics Research Institute Malaysia (Nahrim) on rising sea levels along the coast of Malaysia.

“We at NRE are serious about this issue and the problem will pose a threat in the future if not tackled seriously,” said Minister of Natural Resources and Environment Dato Sri Wan Junaidi Tuanku Bujang when launching the programme yesterday.

“Among the areas expected to see a rise are the coast of Kedah, Kelantan, eastern part of Sabah and river mouths of Sarawak among others,” he said.

Wan Junaidi pointed out that changes in the global climate had caused various natural disasters and rising sea levels are also a potential threat.

He said the programme is a holistic step to address the issue and also involves the public, especially those living along the coastline.

“Despite such projection in terms of timeline for it to occur, public awareness is vital to inform residents, especially those living on the coasts on the possibility of such a problem,” he said.

He explained that rising sea levels would lead to other disasters and problems such as landslides and damage to houses.