Thursday, July 7
You are at:Home»News»Sarawak»Tiong helping family of suicide student in Taiwan 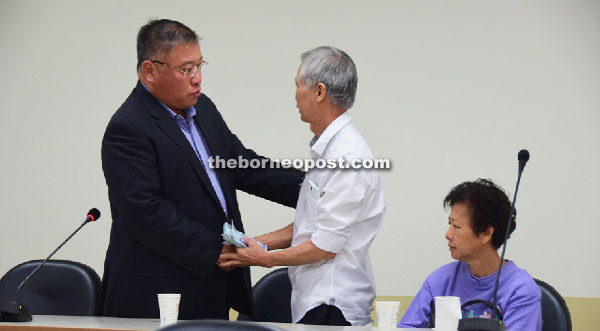 Tiong hands over a donation to Law’s parents and conveying Premier Najib’s condolences to them.

The student Law Kah Yee, a 24-year-old student studying at the National Taiwan Normal University, was found dead in her room rented in downtown Taipei City after she failed to turn up for her part-time work.

She had committed suicide by burning charcoal in her room.

The news shocked the Malaysian students community in Taiwan and when Prime Minister Datuk Seri Najib Tun Razak was informed of the tragedy, he directed Tiong to fly to Taipei to provide assistance to the family which had gone there.

The Special Trade Envoy liaised with the local authorities and Malaysia Friendship and Trade Centre (MFTC) here to help with the funeral arrangement and send her ashes back.

Tiong accompanied by representatives from MFTC, including president Datuk Adeline Leong and deputy president Anwar were briefed by the director of Student Affairs Office in National Taiwan Normal University,

Chang Shao Hsi on Law’s situation, and performance in the university.

The Special Envoy also conveyed condolences from Najib and himself to the victim’s family.

He noted it has been a bumpy year for Malaysian students in Taiwan this year so far as there were two cases of missing students in February and March but both were later found safe.

Tiong urged Malaysian students in Taiwan not to hesitate to look for help in the face of difficulties.

“Beside your friends and family, there are also authorities and organisations that you can seek help from, including the MFTC， Malaysian Chamber of Commerce and Malaysian Students’ Association in Taiwan.”