Thursday, October 22
You are at:Home»News»Sabah»WHAT a 30-minute relief 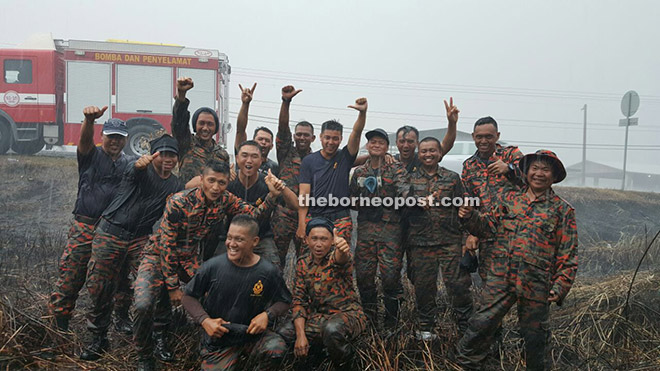 Firefighters who have been battling fires in Papar, were relieved and overjoyed as they cool off in the rain after battling bush and forest fire since the El Nino dry spell.

KOTA KINABALU: Rains lasting some 30 minutes here, and in Papar, Penampang, Inanam and other districts yesterday was greeted with a sigh of relief and joy to the people.

It is believed that the rains were brought about by the cloud seeding carried out to clear the haze caused by bush and forest fires in certain areas such as Beaufort, Menumbok, Membakut, Kuala Penyu, Sipitang, Penampang, Kota Kinabalu, Tuaran and certain areas in rural of Sabah.

The cloud seeding operation was carried out in collaboration with the Meteorological Department (MetMalaysia), the Water Department, the Royal Malaysian Air force (RMAF) and the Ministry of Science, Technology and Innovation on Thursday, April 7.

The rains, which started around 3pm yesterday, were felt in Kota Kinabalu, Inanam, Penampang, Papar, here and in other districts.

But unfortunately, not even a tiny drop of rain was felt in other districts such as Tuaran.

MetMalaysia said the operation would continue throughout the week depending on the weather condition.

Although the rain lasted for couple hours, it was enough to bring smiles to firefighters who have been exposed to the intense heat while battling bush and forest fire since early this year.

Meanwhile, firefighters battling bush fire in Binsuluk said the rains brought relief to their efforts in putting out the fire yesterday.