Wednesday, June 23
You are at:Home»News»Sarawak»Private sector urged to delve into agriculture sector 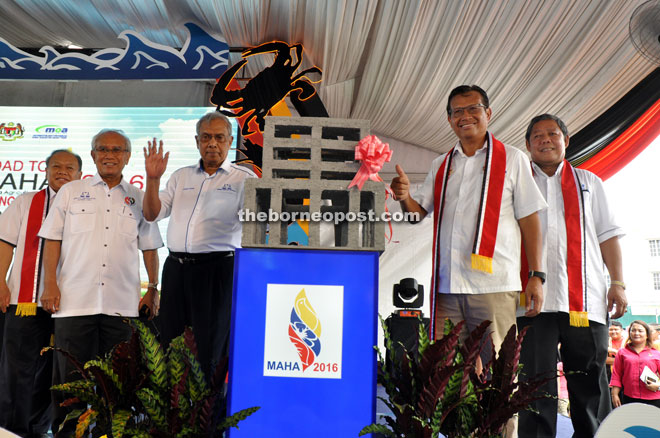 Adenan (third left) poses for the camera after the symbolic launch of Road to Maha 2016 together with Ahmad Shabery (second right), Nogeh (right), Jabu (second left) and Nansian at Lundu Waterfront.

LUNDU: The state’s food production must be increased through the participation of the private sector to ensure sustainable supply.

With the plantations and manufacturers taking part in the food industry, the state and country will be able to cut down on imports which reached billions of ringgit each year, Chief Minister Datuk Patinggi Tan Sri Adenan Satem said.

“I am calling and inviting those from the private sector to invest in this (food industry) as we must go for commercial agriculture to produce food. That is what we need in Sarawak,” he said when launching the state-level 2016 Road to Malaysia Agriculture, Horticulture and Agrotourism (Maha) Show at the Lundu Waterfront yesterday.

He also said it was vital for the state and federal governments to boost the nation’s food production in view of the rising population in Malaysia and elsewhere.

A sustainable food supply, he added, would also play an instrumental role in the nation’s economic and social development as it would meet the needs and demands of consumers.

With Sarawak already having enough oil palm plantations, he said it was thus high time for the private sector to delve into the untapped agriculture and agro-based industry.

The involvement of the private sector in the industry would then act as a support to farmers, fishermen and small time food manufacturers by adding value and marketing the products, he added.

He mentioned that among Sarawak’s food products that have potential to be exported are ‘buah dabai’ and Bario rice.

He lamented that the potential for growth of these two food items as well as cattle breeding for dairy and meat products were rather slow due to the absence of investors.

“It is amazing that Sarawak is ten times bigger than the size of Negeri Sembilan, yet the number of cattle that they have there is ten times the number we have in Sarawak,” he pointed out.

He advised the private sector to take advantage of the state’s vastness to expand the agriculture and horticulture sectors which would one day make the state not reliant on imports.

“Currently, our state’s food production is not enough for our people’s consumption. This is why in 2015, the total expenditure for food import was RM4.26 billion,” said Adenan, adding that rice import was RM289.25 million last year.

“These figures only show that there is more to be done to meet the needs of the people in Sarawak,” he added.

On another note, he suggested that the federal government particularly the Ministry of Agriculture and Agro-Based Industry should take the lead in preparing the infrastructure for agriculture in Sarawak.

He also proposed that that more funds be given to the state to realise its vision to be self-sufficient in food.

Meanwhile, he thanked the federal government for holding the Maha event in Sarawak, which he expected to be an eye opener for the locals on the importance of food production.

He said the main Maha 2016 would held on a grand scale in Serdang, Selangor from Nov 24 to Dec 4.

“I have visited the Maha show there. I feel that it would require a week to visit all of the booths there,” he quipped. 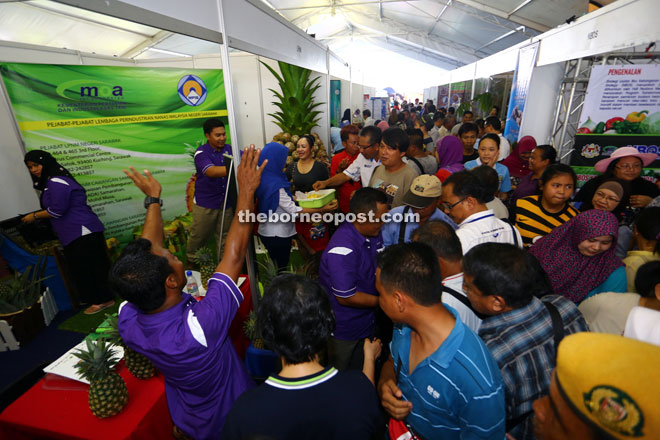 A section of the some 5,000 visitors thronging the stalls at Lundu Waterfront for the Road to Maha 2016 yesterday. 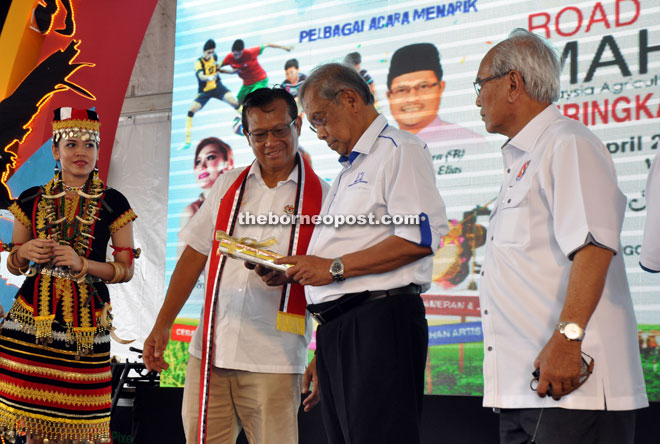 Adenan (second right) looking at a memento given to him by Ahmad Shabery (second left) in conjunction with the launch of Road to Maha 2016 while Jabu (right) looks on.