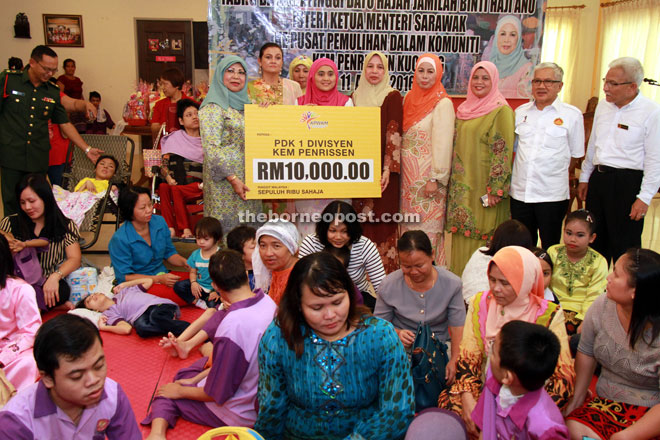 Rohani (left) handing over a mock cheque for RM10,000 to a CBR representative. Also seen here are Jamilah (fourth right) and Rubiah (third right). — Photo by Chimon Upon

Women, Family and Community Development Minister Datuk Seri Rohani Abdul Karim said there are 47 CBRs in Sarawak, and people can find out how they can help without waiting for the centres to send out requests first.

“At the same time, I ask that the State Welfare Department design a new strategy to develop the CBRs with the help of local corporate bodies or enterprises,” she said.

She was among those who accompanied Association of Wives of Ministers and Assistant Ministers (Sabati) President and Chief Minister’s wife Datin Patinggi Dato Jamilah Anu to visit the Penrissen Camp CBR yesterday.

She was briefed on the centre by its principal Lt-Col Wan Edenin Wan Mahsin, who is also Third Brigade Chief of Staff.

In her speech during the high tea gathering with BAKAT Kuching and Women members of the Malaysian Armed Forces, Rohani said that three new CBR centres had been approved in the state this year, namely Satok (Kuching), Niah (Miri) and Gedong (Samarahan), bringing the total to 47 such centres in Sarawak.

“Development of special needs individuals (OKUs) hinges on their early education at a CBR centre. We want them to be independent, able to take care of themselves, and have skill training as well as interactive skills when they go out to work.”

There are 34,310 special needs individuals registered with the ministry as of March 2016, making CBR a crucial element in Sarawak.

According to Rohani, 20 per cent of the trainees are from Penrissen Camp itself while the rest are from the surrounding community.

“This year, the state welfare department is encouraging all CBR to run an ‘Economic Development Programme’, where courses will be offered with cooperation from craft councils and community colleges towards having a ‘1 CBR 1 Product’.”

At the function, Rohani handed over RM10,000 to Penrissen Camp CBR.