Sunday, April 18
You are at:Home»News»Nation»DCA to implement staggered increase in fees, charges — Liow 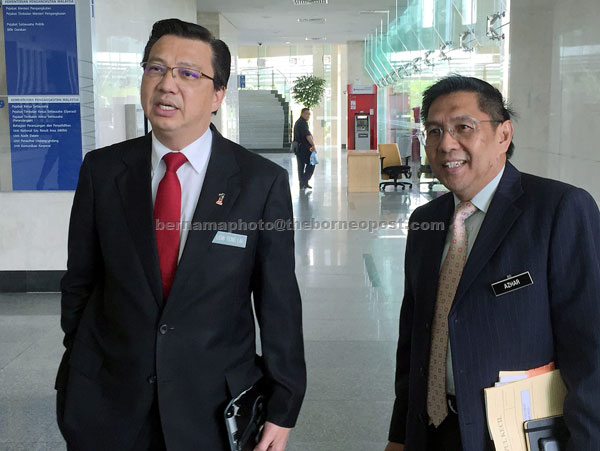 Liow and Azharuddin (right) talking to the press. — Bernama photo

He said the decision was made after the meeting between the DCA and airline companies yesterday, which had requested for the staggered increase to enable them to plan their budgets and avoid the impact on the airfares.

“We had a warm and fruitful meeting and the stakeholders now understand our intention and commitment to provide better services.

“They said the (proposed) increase is too sudden for them. So it has to be a plan on how we can increase it and at the same time benefit the industry.

“The crux of the issue at this time is that it would not affect the airfares,” he told reporters at his ministry here yesterday.

Liow said while the review in fees and charges, which had not been done for over 40 years, was inevitable, the DCA would continue to engage with the industry players so that all parties would be in a win-win situation.

On whether the new fees and charges would be implemented as planned on April 15, Liow said he would issue a statement in the ‘near future’.

“April 15 is the target dateline but that depends on how soon they (DCA and industry players) can conclude their discussions,” he said.

He said the industry needed to understand that DCA would be transformed into a civil aviation authority which required it to have a better services, equipment and personnel.

“We (DCA) also cover a wide range of services. So all these need additional funds for the betterment of the industry,” he said.

“So we are talking with the airlines how we can move together,” he said.

The proposed increase in aviation fees and service charges include usage of airspace, air traffic facilities as well as pilot’s flight licence.

Under the proposal, air navigation flight charges will increase from the current five sen per nautical mile to 50 sen for light aircraft not exceeding 2,500kg.