Sunday, January 23
You are at:Home»Sports»Football»FAM says no to debate

Association willing to hold closed door discussions with all quarters 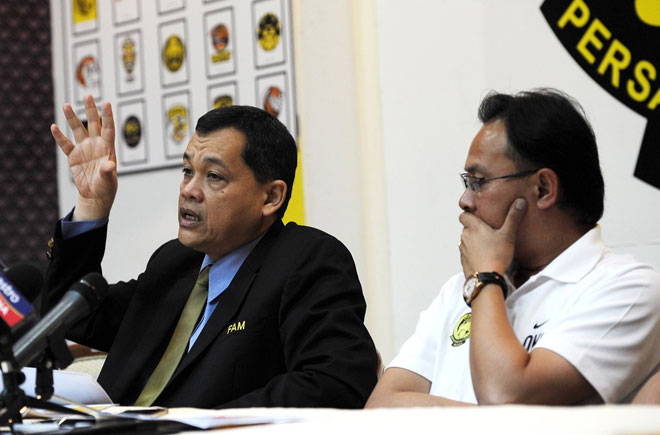 PETALING JAYA: The Football Association of Malaysia (FAM) has declined a debate with the Tunku Mahkota of Johor (TMJ) Tunku Ismail Sultan Ibrahim, but is prepared for a closed door meeting.

FAM secretary-general Datuk Hamidin Mohd Amin said the association did not agree to the open debate with the owner of the Johor Darul Ta’zim club (JDT) on the current poor performance of the national squad.

“Personally, I am not good at debating. I feel the TMJ’s views were misinterpreted. He wanted a discussion to find a solution to help the national team become successful. FAM has always been open to hold discussions with any quarter. But I don’t agree to hold an open debate on television, because the discussion must follow a correct mechanism to achieve success,” he said at an FAM monthly media conference at Wisma FAM yesterday.

The FAM monthly media conference was being held for the first time as a channel to explain and clarify its training programmes and the matches organised for the national squad.

On Tuesday, Tunku Ismail, via the JDT official Facebook, The Southern Tigers, was reported to be seeking a debate with Youth and Sports Minister Khairy Jamaluddin and FAM representatives to find the causes and also solutions to the deteriorating performance of the Harimau Malaysia squad.

At the same time, he said the debate should involve supporters who were permitted to voice their opinions and ask any question which were aired live via paid television station, Astro.

The brouhaha was following a statement by Khairy, prior to this, claiming that local football players were lacking in quality after Malaysia’s ranking dropped to 174th in the world, the lowest position for Malaysia since the new International Federation of Association Football ranking system was introduced in December, 1992.

On Wednesday, Khairy was the second party to respond to the challenge of Tunku Ismail after the Malaysian Football Coaches Association president B Sathianathan, who was also prepared for the debate.

“I feel this is not the time for the blame game. What’s important is the input obtained from the discussions and all must cooperate to boost the level of our football.

“I also agree with the views of TMJ, namely, to give focus on development at the grassroot,” he said. — Bernama