Wednesday, May 12
You are at:Home»News»Sarawak»Anzac group visits Kuching South Mayor during annual trip to city 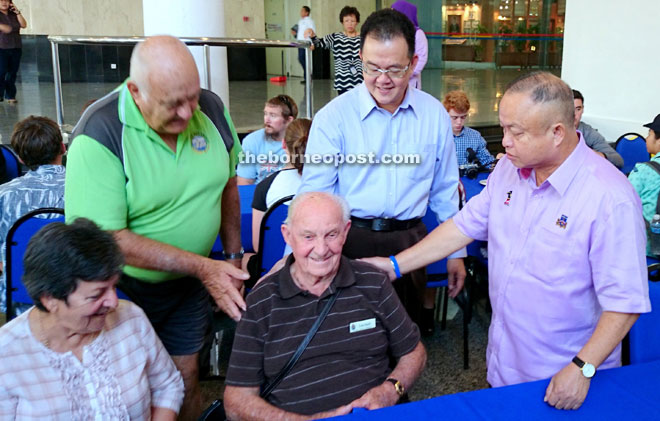 Chan (right) greets Len Snell — the oldest amongst Anzac veterans who fought in Sarawak during the Japanese Occupation in the 1940s.

Mayor Chan said he was happy that the Anzac group had continued to come here every year, where they could experience the multitude of culture of this city.

“I am glad to see that the Anzac group continues to bring young Australians (to Kuching) and I hope for more (students to come) in the future to further strengthen the bilateral relationship between Sarawak and Australia.

“I also look forward to having more collaborations for meaningful programmes,” he said.

The mayor added that he had always admired the parks and gardens in Australia, of which he hoped to beautify the state capital in a similar way.

“I hope to make a study visit to Australia to learn from the Australian model, including through visits to their memorials. The Australian heritage parks, with gardens and memorials, are not only tourism attractions in Australia, but are also places that commemorate Australia’s history and heritage — places for the locals to appreciate the value of peace and freedom.”

“This programme, which includes visits and education on heritage, covers Sarawak’s rich history on World War II (WWII) in Borneo. We further hope that the state government would look into a fixed allocation for the council (local government) for the continuance of our yearly heritage activities.

“This is a common practice in Australia as local governments (councils) are doing a lot for heritage, aimed at educating young citizens on history, peace and freedom as well as to preserve the identity of the country. This, no doubt, attracts tourists as well as local communities as evidenced by the success of the wartime exhibitions he held in Sarawak earlier.”

Rowland also hoped that the government would have a plan under its financial budget for the heritage group to continue the good work undertaken by STF, ABC and the city council.