Tuesday, April 13
You are at:Home»News»Sarawak»DBKU holds dialogue on public safety 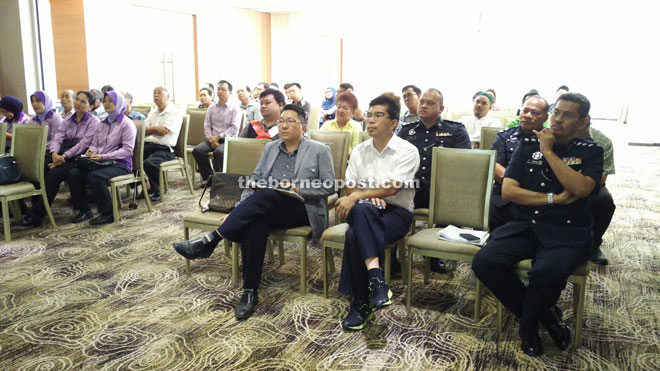 (From right) Abang Ahmad, Pau and Wee join the community from India Street and Main Bazaar in a Safe City dialogue.

“Blackspot does not mean a high level of criminal activities in the area but more of people afraid to become victims to crime when in such places,” he explained.

“India Street and Main Bazaar have been identified in this Safe City programme as the two areas with intense development in recent years so there’s a need to re-coordinate and enhance security to provide a more comfortable place for people and business owners.”

“This safety programme is intended at getting feedback from the local community, working with the police, improve efforts and coming up with solutions to issues and problems in the areas in a bid to ‘whiten’ them,” he added.

Among the critical projects DBKU had initiated to make Kuching a better city were installing lights to brighten up dark spots, installing posts or fencing at five-foot-ways, and providing motorcycle parking lots with locks.

“All these are efforts to ensure public safety and prevent crimes such as snatch thefts,” he said, adding that DBKU would do more this year with a RM600,000 allocation.

Abdul Wahap assured that more such dialogues would be organised to target different areas in the near future.

Meanwhile, Abang Ahmad pointed out that the crime rate in India Street and Main Bazaar was under control with no violent crimes like murder, rape and robbery using firearms.

“According to statistics, the crime rate in central Kuching city recorded in the first three months of this year have dropped from last year,” he said.

“There were 16 cases reported from Jan 1 to March 31 this year compared to 57 cases in the same period last year. Most of the cases were related to thefts of property like missing motorcycles,” he added.

The CCTV, Abang Ahmad, said had helped police in surveillance work and deterred criminal activities in places like the Waterfront.

He pledged to work hard and do to his best to ensure the safety and security of Kuching despite all the challenges especially now with coming events like the state election and Sukma games.