Saturday, February 29
You are at:Home»News»Sarawak»‘Paint the World’ tour to Georgia a huge thrill 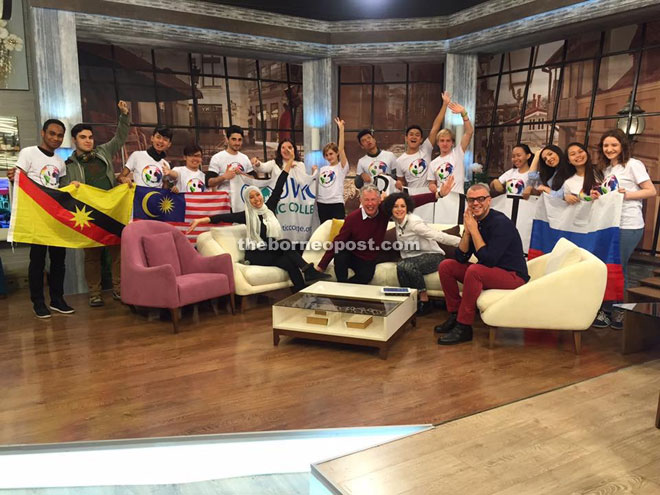 MIRI: The recent ‘Paint the World Malaysia-Georgia Peace Project’ in Georgia was a thrilling success and a memorable experience for the 16 young participants.

They were joined by two Russians – Saiyoral Mamkulova and Anton Tekhneriadov. Aziza and Lika attend UK–United World College (UWC) and their vice principal David Booker also came with the team.

The eight Malaysians were Aziza, Clinton Chua (PTW president), Clarissa Wee (vice-president) and Gavril Ang of Miri; and Allaister Vyner, Mohd Nazreen Hussain, Janet Wee and Mohd Khairurani of the Paint the World Kuching who are from Technology College Sarawak.

According to Aziza, upon arrival at Tblisi International Airport, the Malaysians were greeted by the Georgian team with a flash mob of Georgian traditional dancers.

“They then met their Georgian ‘link families’,” she told The Borneo Post here recently.

On the following day, the Malaysians were brought to Georgia’s oldest Orthodox Church where those who were Christians had a chance to pray, then proceeded to the one and only mosque in Georgia where the Muslims in the project went for prayer, and also the synagogue to witness the Jews pray.

“We travelled in a van, mingled with the Georgians, got to know them and learned Russian, Georgian and Malaysian languages.

“It was amazing to exchange our cultures and build new friendship,” Aziza admitted.

On the third day, the Malaysian team was brought to Mtskheta and the Georgian Trinity Cathedral, then to the Georgian National Museum and the Qarvasla Museum to know about Georgian history.

The next day, the team left for Dilijan and Armenia and visited the United World College Dilijan, Armenia. On arrival, the Malaysians met the UWC students and did a presentation on ‘Paint the World’. They also got the opportunity to engage in CAS (after school activities and services) with UWC students, part of the students’ exchange programme between Technology College Sarawak (TCS) and United World College (UWC).

After two days of performing the Orang Ulu traditional dances for the orphans in Armenia, visits to the museum and orienteering with UWC students, the team headed back to Tblisi.

The Malaysian team went on GDS TV to record live on national TV with them (Malaysians) dressed in the traditional costumes of Indian, Chinese, Malay and Orang Ulu.

Clinton presented his original song on Borneo Top 3 Chart ‘Demam Cinta’ while the team danced for TV live telecast. Then the Malaysians met up with Gia Maisashvili, a Georgian politician in Georgia’s oldest school where they presented PTW to the students and staged the Malaysian cultural dances.

“We had another live Imedi TV telecast the next day to talk about PTW in Malaysia and Georgia and how friendship was made between two countries to bolster a strong bond.

“Then we went to the national gallery and to Lashvili Hospital for children with cancer for the PTW events,” Aziza recalled.

The eighth day brought the team to watch the Georgian traditional dances by Georgia’s best dance group, ‘Erisioniwho’ and to Mtatsminda-Funicular, a Fun Fair Park to bring the orphans to ride on roller coasters and bumper cars and to the Haunted House.

On the ninth day, the closing ceremony was held with all sponsors at the conference room in the Jewish Museum.

“We flew back to Malaysia the next day, which took almost two days stopping by at Kuala Lumpur, Doha and Azerbaijan,” Aziza said.