Saturday, August 8
You are at:Home»News»Sarawak»Regional hype on Jazz Fest with tickets to match 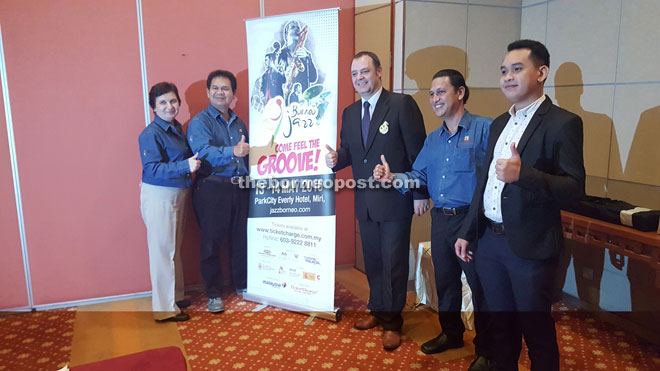 MIRI: The 11th Borneo Jazz Festival scheduled on May 13-14 at ParkCity Everly Hotel Miri will continue to be one of the well-patronised jazz festivals in the region despite higher ticket prices starting this year.

“Previously, our ticket price was very cheap and yet our standard was on par with other jazz festivals. Our current ticket price is very competitive and with jazz having its own following, we are confident we can still continue to attract some 4,000 festival goers this year,” he said at a joint press conference yesterday.

This year’s pre-sale prices with adult passes is RM80 for a one-day pass and RM140 for a two-day pass, increased respectively from RM50 and RM95; while the family package with two adult passes and two child passes has been raised from RM100 to RM160

For children aged seven to 12 years, tickets are RM40 for a one-day pass and RM60 for a two-day pass.

Special price pre-sale tickets can be purchased online at the festival’s website www. jazzborneo.com available until May 12 while on May 13 and 14th, the price will be increased between RM10 to RM40 depending on the categories.

“For the World Youth Day Jazz on May 6-8, we will present O Sister! from Spain and Yuichiro Tokuda’s Ralyzzdig from Japan. They are among the eight bands to perform in Miri,” she said.

The two-day annual festival of jazz music will be staged from May 13 (Friday) till May 14 (Saturday) at ParkCity Everly Hotel in Miri, featuring some top lineups rendering a wide range of jazz genre world-wide.

The other six bands are Raw Earth from Singapore, API from Malaysia and India, Funkatorie from Malaysia, Klazz Brothers from Germany and Cuba, Manou Gallo Groove Orchestra from Ivory Coast and Belgium and The Rad Trads from New York USA.

Angelina added that while MAB sponsored flights for the bands, MasWings is offering up to 70 percent discount for festival goers to Miri, while those flying into Miri from Kuching and Kota Kinabalu from now have the chance to win 50 complimentary tickets.

So far, she said some 2,000 people have obtained the early bird tickets for the festival.

Among the activities to be held as a prelude to the two-night show are a preview show at Ming Cafe on May 11 at 9pm, tree planting at Piasau Nature Reserve (PNR) on May 12 and workshop on keyboard/piano on Jazz and Pop Patterns as an outreach programme that targets local musicians.

Admission is free for the show held at ParkCity Everly Hotel’s Ruai Bar from 10am to 12pm on May 13.

After the concert finale (May 14), on Sunday (May 15) music fans and running enthusiasts can take part in the inaugural Miri City Day Half Marathon 2016 where the organisers are targeting 5,000 runners for the Half Marathon event – with three distances of 21km, 10km and a 5km Fun Run

The Half Marathon and Fun Run – organised by Robust Lifestyle in collaboration with Miri City Council (MCC) and Page Event – are part of this year’s Miri May Fest/Miri City Day celebration.