Tuesday, November 24
You are at:Home»News»Sarawak»Teacher passionate about public speaking in English 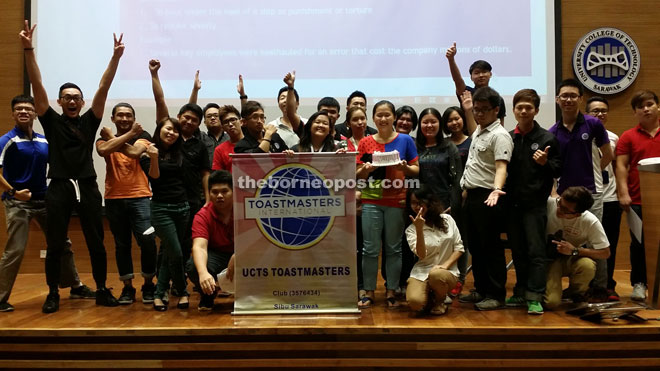 Students of UCTS, the only university in Sibu, share the joy of learning and sharing as a team.

SIBU: English language teacher Lydia Wong Han Yii and her team are taking her six Toastmasters and Gavel Club members up the leadership ladder by polishing up their communication skill in the language.

This comes at a time when the country is promoting greater use of the lingua franca and when the Education Ministry is making English as a must-past subject in SPM examination.

Since becoming the director of Toastmasters of Area 2S in District 87 last July, she has created opportunities for members to train as leaders by first capturing stage fright before sending them out to create impact in public speaking.

Most importantly, Wong said, they should have self-confidence in order to be good orators.

With this in mind, she said they had embarked on a leadership and motivation training themed ‘Reaching up, Reaching out’ and had formed a new Toastmasters club in Kapit and are in the process of setting up a new Gaval Club.

“Members of my six clubs in Area 2 in Sarikei, Sibu and Kapit have built their platforms to fine-tune their professionalism and leadership qualities through improved communication skills,” she said in an interview recently.

She said she had seen over 150 members comprising lawyers, teachers, businessmen, bank workers, technicians and students improving their leadership and oratory skills through Toastmasters clubs.

For students, she had set up the Diamond Speakers Gavel Club for those aged 13 to 17.

Wong is a teacher at SMK Kampung Nangka and has been teaching English for six years.

For her commitment, she was made the vice president of education in Sibu Toastmasters Club – the club that groomed her.

She proved herself in 2014 when she emerged the first runner-up in the international speech contest organised by District 87 Toastmasters in Surabaya.

Why does Wong have so much confidence in training through Toastmasters International?

The English teacher said: “For over nine decades, Toastmasters International has improved communication skills through speaking, listening, and thinking. Four million people worldwide have benefited. There are over 15,400 clubs worldwide with 332,000 members in 135 countries. We have formed a network to share experiences with worldwide members. We learn through mutual support.” Wong is particular about training students in her Diamond Speakers Gavel Club to speak English proficiently.

Established in 2013, the mentor said the club built confidence by teaching English language in a fun-filled and efficient environment and tackling tricky questions promptly.

“The club meets every first and third week of the month in a hotel; members are equipped with a communication skills kit containing the Competent Communicator and Competent Leader manuals.”

She said students improved their public speaking ability through evaluation and brain-storming. In addition, they get to mingle with each other and learn teamwork through games, she further said.

“The club also holds contests and workshops. So, apart from mastering public speaking, students pick up skills for job interviews and other purposes. This training boosts self-confidence and builds their future.” For the adult clubs, she said members acquire new experiences and self-improvement through exploring, learning and sharing creativity.

“We provide a learning environment to grow with fellow Toastmasters members. No matter what professional fields you are in, communication and leadership are core values to success.”

On the future of Toastmasters in her Area 2, she said: “The international non-profit organisation, formed in 1924 by Ralph C. Smedley, has produced successful leaders and speakers worldwide. Toastmasters in Area 2 of District 87 will continue to attract members. We shall continue learning to speak proficiently in English – an international language we cannot live without.”