Wednesday, October 27
You are at:Home»News»Sarawak»New feature for Iban traditional costume 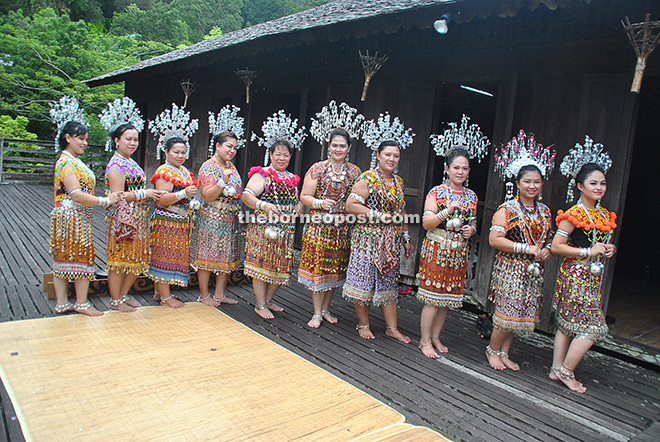 KAPIT: After receiving much comment and criticism on the controversial use of ‘gagung’ that went viral in the social media, the lady members of Kelab Gagung Sibu Sarawak (KGS) has donned a new look that still maintain the traditional Iban women’s costume blended with a new distinctive feature of beadwork instead of using the ‘selampai’.

They made their first appearance with the new outfit at the club’s participation in a video clip to usher this year’s Gawai at Sarawak Cultural Village recently.

Chairman of KGS Jabang Juntan expressed his gratefulness to KGS ladies despite the short period of time, they were able to come up with their own version of contemporary attire that still maintain the traditional Iban maiden costumes of using ‘tango’, ‘kainkebat’, ‘sugutinggi’ and other relevant accessories.

“With the new look we hope the controversial use of the ‘gagung’ by KGS ladies is a thing of the past,” he said.

Since its formation on 15 December last year, the club has carried out several activities including participating in several official functions of the government.

Club members also participated in the ‘Gawai Sandau Ari’ held at Rumah Banying Bukong in Kanowit on 21 February , took part in the welcoming of the Prime Minister and Chief Minister at the Sejiwa Senada Programme at Saratok on 28 February and at Kapit on 5 March 2016.

Its coming activity is the welcoming of the Prime Minister and Chief Minister at the launching of RTC Mid Layar Betong on 17 April.

The formation of ‘Kelab Gagung Sibu Sarawak’ is aimed at preserving the Iban culture and traditional Iban warrior costumes/vest known as ‘gagung’ including the headgear (ketapusilong or lelanjang).

It also serves as a platform for the members to standardise the warrior costumes and to stick to the Dayak Iban ‘gagung’ own identity without having to blend it with the other communities’ accessories and headgear especially those from the Orang Ulu.