Sunday, February 5
You are at:Home»News»Sarawak»‘Legislation for waste segregation necessary’
For the freshest news, join The Borneo Post's Telegram Channel and The Borneo Post on Newswav. 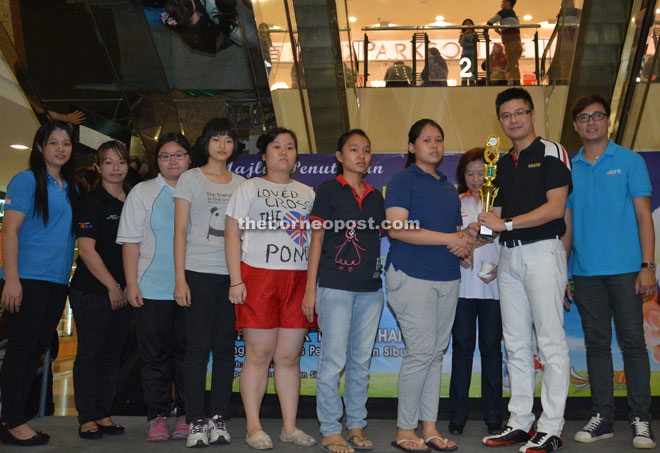 Wong (second right) presents the prize to the winning team of a competition held in conjunction with ‘Love Earth Day.’

Hence he suggested that a legislation similar to the Solid Waste and Public Cleansing Management Act 2007 introduced in Peninsular Malaysia could be implemented here towards greening up the environment.

“Segregation of waste should start from home but without proper rules and processes in place, it would be difficult at the moment to convince people to follow through on this,” Wong told The Borneo Post yesterday.

He was asked if loving the environment should start from home by segregating waste that could be recycled such as papers and cans, among other items.

Starting Sept 1 last year, households in the peninsula must segregate solid waste as required under the Solid Waste and Public Cleansing Management Act 2007.

On this, Wong said: “I believe that a law needs to be implemented for waste segregation to be a success.”

Asked on the composting machine to be placed in Sibu Central Market, he said the council was still waiting for funding.

The proposed composting machine utilises a new technology to recycle organic waste into fertilisers and reduce waste disposed of onto the landfills.

Powered by a local technology, it is capable of handling some 260kg of waste daily. When representing SMC chairman Datuk Tiong Thai King in officiating at the closing of the Love Earth Day celebration at the lobby of Wisma Sanyan here last Saturday, Wong called for concerted efforts to green up the environment.

On this, he wanted to see greater cooperation between the public and the council.

“I would like all of you to remember that loving Mother Earth, loving Sibu is not just for these few days. Therefore, I hope today (Saturday) would just be the start and that all of you would work with SMC to ensure that Sibu is kept clean and a safe town for everyone to stay in,” Wong said.