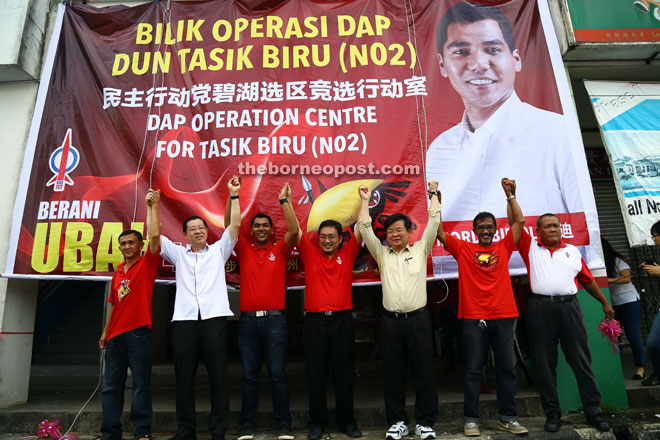 BAU: DAP has formally announced Mordi Bimol, 31, as its candidate for Tasik Biru in the coming state election.

Its state chairman Chong Chieng Jen made this announcement at the launching of DAP’s operations centre in Tasik Biru, here yesterday.

The centre was launched by Penang Chief Minister, who is also DAP secretary-general, Lim Guan Eng.

room without a candidate right? So I would like to take this opportunity to make a formal announcement that DAP is

going to field Mordi Bimol (in Tasik Biru) for this coming state election.

“I hope that everybody can support him. He was here, he is still here and he will always be here,” he said to the applause of those who attended the launching.

Chong, who is Bandar Kuching MP, said the coming state election would be a very important one not only for Sarawakians but also for Prime Minister Datuk Seri Najib Tun Razak.

He said Sarawakians had nothing personal against Najib but just did not like the policies implemented by him and Barisan Nasional (BN) government.

When Chong asked which policy the people hated the most, the crowd shouted ‘GST’ (Goods and Services Tax).

“This is the first state election after the GST is implemented. There is no use in scolding (about GST) in the coffee shop. The government cannot hear. It is through your votes that you can send a clear message to the BN government that we don’t like GST.”

As a result of the implementation of GST, he said the people felt the pinch of increasing prices of goods and services.

“Our lives became difficult but those on top in BN did not feel it because they are rich. What is six per cent to them?”

Chong claimed that if BN managed to win more seats in the coming state election, it would send a message to Najib and BN government that Sarawakians support GST and would give them an excuse to increase the GST rate further to 10 per cent.

“Our friends in Peninsular Malaysia hope that Sarawakians will join their fight against the implementation of GST. Therefore, don’t support GST again. For the sake of all of us and our next generation, we must send a clear message that we don’t want GST.”