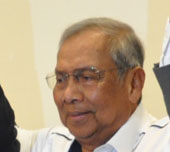 MIRI: Sarawak will not break up timber licences granted to the so-called ‘Big Six’ companies as such a move would have a negative impact on the state’s social and economic spheres, said Chief Minister Datuk Patinggi Tan Sri Adenan Satem.

He said it may also cause thousands of timber industry workers to lose their jobs as small timber companies would not have the financial capability for long-term investments. He cautioned this may well happen if people voted for the opposition, which favoured the move, in the upcoming state election.

Adenan said this at a gathering with Shin Yang Group of Companies’ personnel here yesterday.

Sarawak DAP chairman Chong Chieng Jen recently called for an immediate review and termination of a substantial portion of the timber licences granted to the six companies.

Chong had proposed that the licences be divided into smaller areas and for concessions to be gradually awarded through open tender for the purpose of downstream timber industry activities. — Bernama