Saturday, May 28
You are at:Home»News»12th Sarawak Election»Former MP Anek to stand in Opar 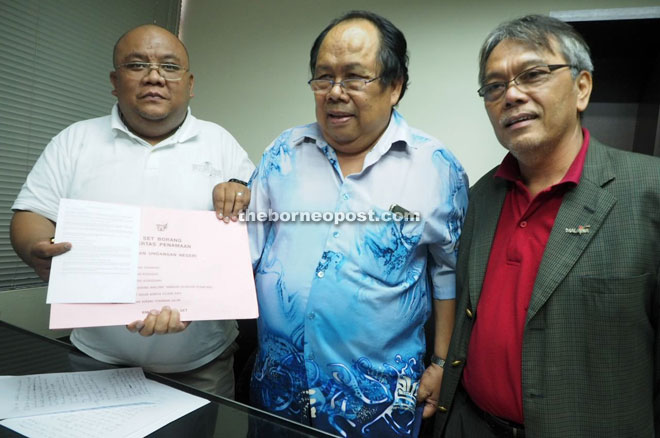 Anek (centre) and Louis holding a nomination form. Elli is on the right.

PBDS Baru president Louis Jarau said his party would also contest in several more Dayak-majority seats, but its full candidates’ list would only be unveiled on nomination day – April 25.

“We will contest in about 10 Dayak-majority seats in rural areas,” he told a press conference yesterday.

“We are in the process of finalising our candidates’ list, which will be announced on nomination day.”

Loius, however, said he and vice-president Dr Elli Luhat would not be contesting in the state polls.

“We plan to contest in the next general election.”

Meanwhile, Anek said he wanted to be the voice of the people in Opar as former Opar assemblyman Ranum Mina had failed to do so.

He described as ‘self-centred’ Ranum’s move in quitting United People’s Party (UPP) in order to contest as a direct BN candidate.

He opined Ranum did not consider the importance of the people at the grassroots level before making the quit decision.

“We do not need such an individual…someone who willingly leaves the party (UPP) to contest in a state election because he is more concerned about himself and not the people.”

He served as Social Welfare Minister’s parliament secretary from 1974 to 1979 during his time with the now defunct Sarawak National Party (SNAP).

“I hope to be voice of the people in the area, and promise to perform to the best of my ability.”

PBDS was formed in 1983 under the leadership of Tan Sri Leo Moggie after he and several of his supporters left SNAP following an internal crisis.

The party was dissolved twice in 2003 and also the following year due to another leadership crisis, but on Aug 28, 2013, the Registrar of Societies

approved the registration of PBDS Baru.