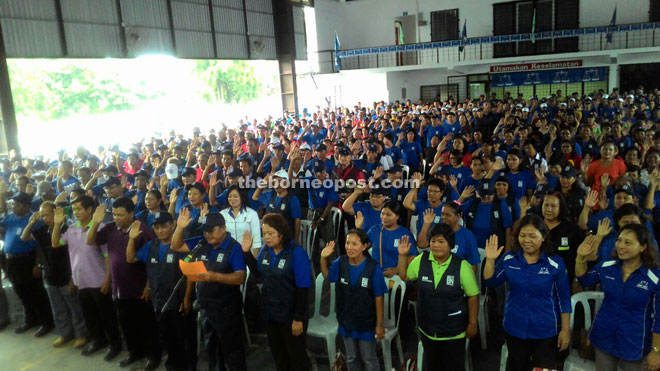 Supporters taking their oath during the launch of the election machinery at Dewan Balai Ringin yesterday.

BALAI RINGIN: The people’s unwavering support for Balai Ringin BN candidate Snowdan Lawan was loud and clear during the launch of the constituency’s election machinery yesterday.

Gracing the launch was PRS president Tan Sri Datuk Amar Dr James Masing, who said the overwhelming support showed solidarity with Snowdan and would further cement the party’s chances of winning all the 11 seats it will contest in the May 7 state election.

“I am further urging all of you especially the grassroots leaders to show your support to Snowdan in order for him to return all the support to you,” said Masing in his address at Dewan Balai Ringin.

He expressed confidence that BN would retain the Balai Ringin seat despite the challenge from the opposition or independent candidates.

“This is a democratic country and we cannot stop them from contesting. We are not afraid of them and we will contest against them,” he enthused.

Masing, who is Minister of Land Development, was also confident that the Iban community which forms the majority of voters in Balai Ringin (85.6 per cent) would rally behind BN and vote for Snowdan.

Also speaking was Snowdan, who vowed to give his best to retain the seat and continue to fight for the people in the constituency.

He also dispelled rumours that he is not a true BN man, saying the chief minister would not have issued him the candidate’s credential letter without checking his background and credentials.

“Calling a BN candidate who has received the credential letter a ‘false’ BN candidate is ridiculous and an insult to the decision of our chief minister,” he added.

On another note, he said he had more plans for Balai Ringin such as elevating the area into a sub-district to improve the constituents’ socio and economic livelihood.

“Usually people will just drive pass Balai Ringin. With the making of the area as a sub district, it will open up more development projects such as a sports complex and a new commercial centre. This will attract people to stop and visit the bazaar,” he added.

He called on the people to come to Pantu District Office on nomination day on April 25 to show their support and solidarity.