Wednesday, July 6
You are at:Home»News»12th Sarawak Election»Masing: Only BN knows how to develop country, state 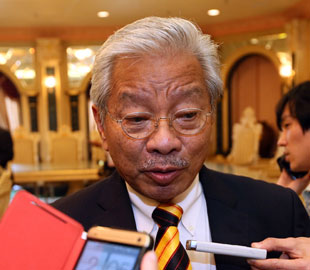 BELAGA: Barisan Nasional (BN) has a clear vision on how to develop the country and the state unlike the opposition parties who only know how to talk, said Parti Rakyat Sarawak (PRS) president Tan Sri Datuk Amar Dr James Masing.

He regarded the opposition as only good in poisoning the people’s mind but contesting in elections without objective as winning is secondary for them.

“We don’t need that, we need people who are very serious on how to develop this country and the state, do not confuse and poison the people’s mind, it is not nice,” Masing told reporters after declaring open the floating jetty and waiting area on Bakun lake on Tuesday.

He was therefore confident that Chuk Pai, the BN candidate for Murum who is a Kenyah, would be the elected representative for the people in Murum after the state election.

“He will win, I am very confident, this is the first time an Orang Ulu from the Kenyah ethnic group will be an elected representative in Murum as we already have one in Belaga,” he said.

He said he was also confident that Chuk Pai would receive strong support from the Kenyah, Kayan and Sekapan communities as their candidate.

Masing pointed out that Chuk Pai was not new in politics as he had been a hardcore supporter of BN elected representatives in the Hulu Rajang parliamentary constituency.

“People trust him and they know he can be the best elected representative for them. I would suggest Orang Ulus to get together and support the BN, because this is the right government which has clear objectives and vision for the people in rural areas,” he added.

By supporting BN, he said more development programmes could be implemented in their respective areas which the opposition would not be able to do even if they won the seat.

He pointed to the road from Bintulu to Belaga as one of the biggest contributions of the BN government to the people there to ease their mobility and accessibility.

“Previously, it took you two days from Kapit to here. I think the government will do well and continue on what they are doing.

“Do not forget our Belaga folk, because they sacrifice so much to allow this Bakun dam to be built. By having this hydro power plant, we have electricity for all of Sarawak,” he said.

Meanwhile, Chuk Pai said he believed that BN would receive strong support from the people in Belaga particularly in Murum in the coming state election because of the progress it had brought to them.