Sunday, January 29
You are at:Home»News»Sarawak»Cops raid cyber gambling den in estate, five held
For the freshest news, join The Borneo Post's Telegram Channel and The Borneo Post on Newswav. 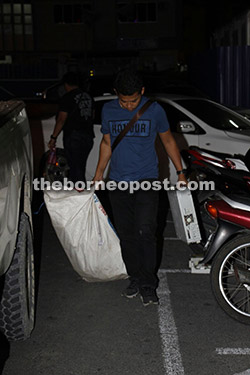 A CID personnel carrying the seized items to the police station.

MIRI: Police here are intensifying efforts to crack down on illegal gambling activities as they conduct relentless raids against those operators who show a blatant disregard for the law.

On Friday night, a team from the Criminal Investigation Department (CID) led by ASP Soliment Nyian conducted a raid at a wooden shed in Ladang Subis, Miri-Bintulu road, Batu Niah.

One of them was the caretaker of the place and the other four were players who were found busy gambling without realising the presence of the police team approaching the area.

According to Dev, the caretaker of the gambling den will be investigated for offences under Section 4B(a) Common Gaming House Act 1953 and Section 5(2) Entertainment Ordinance.

Meanwhile, the players will be investigated under Section 6(1) Common gaming House Act 1953.