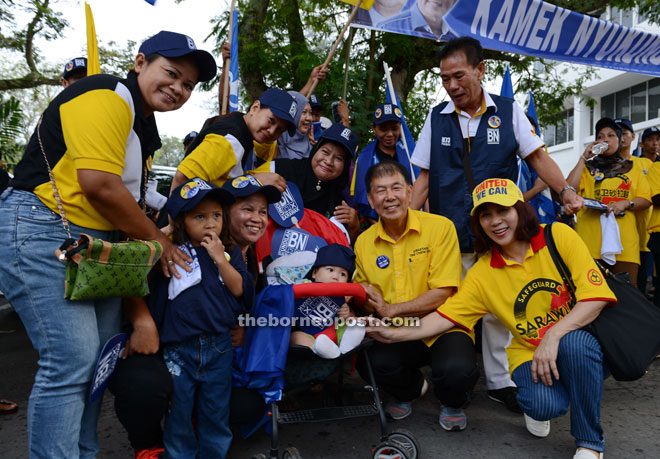 Ting is pictured with his wife, Datin Sylvia Lim Siew Lee (front right) and supporters by an estimated crowd of 1, 500 supporters yesterday.

MIRI: The contest for the Piasau seat will be between the secretary generals of SUPP and DAP as the Barisan Nasional (BN) candidate Datuk Sebastian Ting Chiew Yew and his opponent DAP’s Alan Ling Sie Kiong both hold that post in their parties.

Ling submitted his at 9.17am accompanied by his mother, Wong Yii Ding as proposer and his wife, Florence Lau Bern Ee as seconder.

Returning officer, Siti Suhana Rosli announced the closing of nomination at 10am and confirmed the eligibility of both candidates at 12noon.

Ling is defending the Piasau seat he won in a major upset in 2011 by defeating then incumbent Datuk Patinggi Tan Sri Dr George Chan Hong Nam who was also the deputy chief minister with a majority of 1, 590 votes.

Previous ArticleLucky breakfast before march to nomination centres
Next Article ‘Clan contest’ for Serembu likely to be between Miro, Nyomek