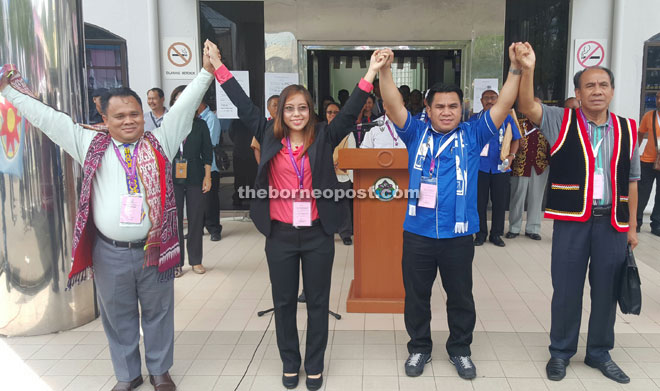 KUCHING: If supporters’ turnout on the nomination day is anything to go by, the real fight in Serembu is set to be between Barisan Nasional (BN) and an Independent candidate.

Yesterday, both direct BN candidate Miro Simuh and independent candidate Datuk Peter Nyomek marched to the nomination centre with about 1,000 supporters each.

As expected, Arthina Klaywa Sim from Parti Keadilan Rakyat (PKR) and Buln Patrick Ribos from State Reform Party (STAR) joined in the fray to set the stage for a four-cornered fight in Serembu.

The interesting thing here, however, is that the contest will feature three members of the Bidayuh Serembu clan — Miro, Nyomek and Arthina — running against each other.

All the three villages are of the Serembu Asal Bau clan, also called Broih.

Commenting on the contest, which can be dubbed as ‘Clash of the Broih’, Miro said he would fight as a gentleman.

“But if the people want to enjoy continued development in the area, they should vote for BN because BN will surely form the government after the election,” he said.

Despite being involved in a four-cornered fight, Miro said nothing was certain for now, not even for BN.

“I anticipate a very stiff fight because there will certainly be a split in the Broih votes.

“This is a new seat and so we do not know the voting trend yet and therefore, at the moment no one can predict the outcome in Serembu,” he said.

He, however, said the BN election machinery was all geared up for the campaign to ensure BN’s victory in Serembu.

Miro submitted his nomination papers at 9.02am. He was proposed by Ahem Atoi and seconded by Joryim Ngayop.

Nyomek said he looked forward to the ‘Clash of the Broih’ although he expected it to be a very tough fight against the BN candidate.

“I admit, it’s going to be tough, especially to fight against Miro, because he has a strong backing from BN in terms of logistics, manpower and funding.

“An an Independent, I depend on my friends, popularity among the people, and my contribution towards the people in the area,” he said.

Nyomek submitted his nomination papers at 9.20am. His proposer is Spilak Asui and seconder Tuah Majim.

Arthina said the four-cornered fight was good for everyone, but the interesting part was that three of them from the same clan would have to face each other to be the first state lawmaker for Serembu.

“Although I’m the youngest among the four, I have no fear facing them. Instead, the participation of the other two who are older and more experienced than me has motivated and strengthened my desire and determination even more.

“I hope the voters in Serembu, especially the young ones, will give me a fair chance to represent them.

“If the chief minister is asking Sarawakians to give him another five years, I’m asking the voters in Serembu to give me five years to serve them and prove myself,” said the 27-year-old practising lawyer.

Arthina’s candidacy was proposed by Iana Akam and seconded by Nokian Nojos. She submitted her nomination papers at 9.10am.

Buln said STAR decided to field its candidate in Serembu as a step to move forward in championing the rights of Sarawakians.

“We want people to know that STAR is one of the local parties that the young generations should be joining because it will set the beginning of the new Sarawak.

“One of our political struggles is to fight for Sarawak’s rights as enshrined in the Malaysia Agreement 1963,” he said.

Buln, who is from Kampung Krokong Belimbing, said a four-cornered fight gives everyone a good chance to win.

Buln’s nomination paper was received at 9.35am. He was proposed by Kadek Ladon and seconded by Nohi Nyamu.

The announcement of the four candidates was made by returning officer Dijan @ Tajon Abet at 11.00am.