Wednesday, May 27
You are at:Home»News»Election News»PKR, DAP clash in Mulu 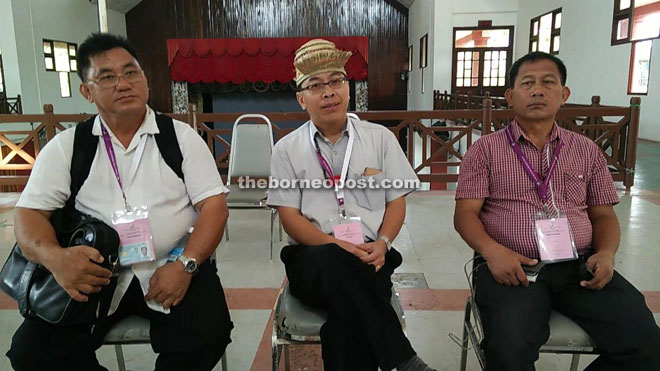 MARUDI: It seems like Pakatan Harapan allies – Parti Keadilan Rakyat (PKR) and DAP – failed to reach an agreement on Mulu seat as two of the candidates from each party showed up at the nomination centre for Mulu at Marudi Civic Centre here yesterday.

The first to arrive at the centre at 8.17am was Paul Raja contesting as DAP candidate.

the seat instead of PKR’s Paul Baya.

“Our top leadership have made the decision and I abide by it. I think being national leaders, they have an overview of the fighters, things on the ground, and that is why they decided to put me as candidate for Mulu today.

It was surprising therefore when about 40 minutes later, Baya showed up at the nomination centre with his proposer Johnny Selong Jalong and seconder Jalin Jubang.

The trio immediately entered the nomination centre to submit their forms.

Baya, when met after returning officer Norlila Ulis announced their candidacy at 12.15pm said he was also told to submit his forms.

“The party leaders asked me to submit my nomination forms, so I am here today.

“This is the instruction from both state (Baru Bian and national PKR leaders (Azmin Ali). I am just following instructions,” he said.

A tough fight is expected in Mulu as both Pauls are challenged by direct Barisan Nasional candidate Datuk Gerawat Gala and Independent Dr Roland Dom Mattu in a four-cornered fight.