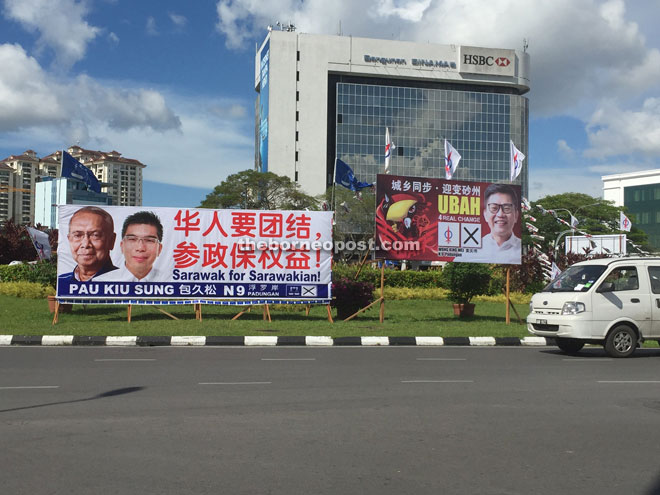 State election war is on with BN and DAP billboards erected side by side. 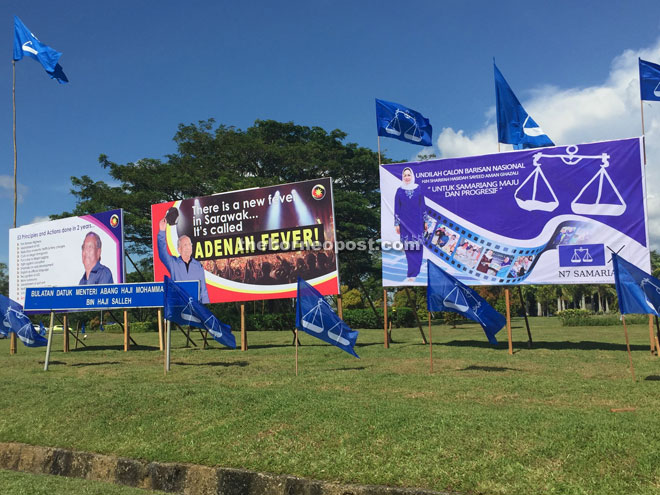 The ‘Adenan fever’ – his credentials and achievements splashed on giant old-fashioned billboards – is dominant while BN flags have been riding the breeze since yesterday.

KUCHING: In keeping with the latest technology, the Sarawak election fever this time around has flaunted the use of eye-catching, giant electronic billboards as campaigning builds up to May 7 polling.

The inaugural e-billboards will give a clearer picture regarding the policies and development programmes implemented under the chief minister’s leadership of 53 principle achievements over two years before the polls was called.

That said, the traditional method of printed bunting is still popular, with flags, posters and banners adorning corners of the city, towns and villagers to escalate campaigning mood as politicians woo voters with their battle-cry in night ceramah.

Though the campaign period just started yesterday with nominations closed on April 25, the main city roads and village roads were a-flutter with flags to kick-start fervour in campaigning.

According to a resident in Samariang, Mohamad Faishal Bujang, 41, the thrill of waiting for polling day is deeply felt as roads around his housing area were decorated with colourful flags from three parties contesting there.

“When I was leaving for work this morning, I was pleasantly surprised with the colours of BN, PAS and Amanah. It continued until Satok and towards the city centre.

“This is just a start and it should be even more colourful and merrier, since we only experience this once every five years,” he said.

For Mohd Hadi Moss, 28, he likened the first day of campaigning as being rather slow compared to previous ones.

He attributed it to just the beginning and will ‘hot up’ two or three days before polling day.

“I believe things would heat up to full blast within days of polling day, before voters come out to cast their vote. So far I noticed only BN and DAP are super enthusiastic in hanging up the flags and posters as I’ve not seen other parties doing likewise yet.”