Tuesday, July 14
You are at:Home»Features»A dream trip to Bario 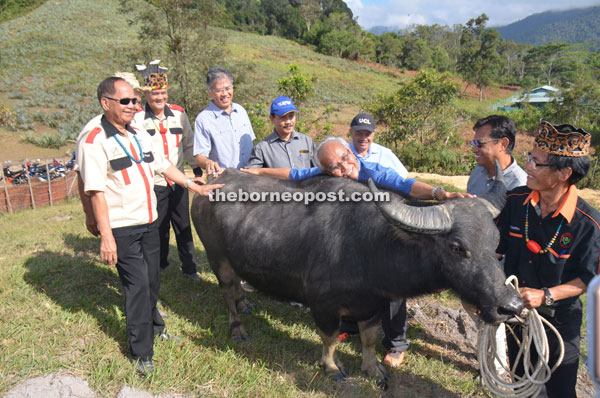 Jabu (third right) rest his head on the back of a buffalo after a visit to a pineapple farm with other Ahmad Shabery (second right) and members of their entourage.

THE many exciting stories about Bario have piqued my interest in visiting the famous Highlands of Sarawak, and on April 3, my dream of journeying to the exotic Kelabit heartland came true.

Assigned to cover a working visit to the jewel of the Land of the Hornbills by the Minister of Agriculture and Agro-based Industry Datuk Seri Ahmad Shabery Cheek, I boarded an MASwings Twin Otter from Miri as early as 8.30am.

There are only three daily flights to Bario — by way of Lawas to Miri that offers a unique experience to anyone who has never flown in a plane smaller than a commercial airliner before — no air stewards or hostesses or toilet.

Flying over the rainforest at low altitude presented a panorama of breathtaking landscapes and scenery viewable through the light air-craft’s window. I took out my camera and snapped away, all while waiting in keen anticipation for the Twin Otter to touch down at Bario Airport — at 9.20am — on my first trip to this fable-like village of hospitable people set against a hauntingly picturesque mountainous backdrop.

Nestled in natural greenery, reaching up to 1,000 meters above sea level and tucked away the northeast part of Sarawak close to the international border with Kalimantan, it is no wonder this pristine wind-swept land is known as Bario which literally means ‘The Valley Of The Wind’ in Kelabit language. The average temperature here is 20 Celsius all year round.

The locals rolled out the red carpet to welcome the visitors who included media representatives and Agriculture Ministry officials. There were warm and sincere smiles all round and, of course refreshing drinks to quench our thirst after the menu-less flight.

I also managed to sample the popular local food at the airport — instant noodles and a traditional delicacy known as ‘senapeh’ or Bario glutinous rice.

After pampering ourselves with food and drinks, we hopped onto a  pickup truck (luggage and all) and headed for the Bario mountain salt processing facility at Main Keramut, Kampung Pa’Umor.

As I entered the place, I felt a scorching heat emanating, apparently, from to the steel drums, containing salt water collected from the nearby salt well and used as part of the salt-making process.

It was a fascinating experience for me — my first encounter with the traditional method of making salt. I was given to understand the water in the steel drums takes about five days to completely evaporate and morph into wet salt crystals.

Once formed, the crystals are packed in bamboo tubes and placed over a fire to continue the drying process. The salt will eventually harden into tubes which are then wrapped in palm leaves (tied with strings) before being consumed or sold.

Bario salt has a high content of minerals (natural iron, potassium, and magnesium) and is a much sought after Highlands product. Tubes of Bario salt are available for sale here at RM20 each. You can also get them in the nearby areas, including shops and markets in Miri. 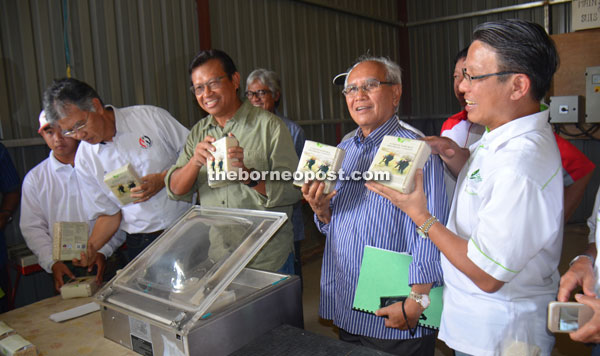 One of the most talked about Highlands products is Bario rice. I was very fortunate to have been able to visit the Bario Ceria rice mill for a closer look at the facility at Bario Ceria Sdn Bhd.

I came to understand that Bario rice, grown in the Highlands, allows for the planting field to be submerged in clean spring water, thus making the rice a natural product. Apart from the terrain, the weather also contributes greatly to ensuring the product is unique with its own standards in terms of taste and aroma compared to other grains.

Although Bario rice has been spreading slowly to other markets and the supply is still limited and available at a ‘reasonably’ high price, it is still a hot item among both locals and foreigners alike.

After an eventful afternoon, we were finally brought to the place, known as Nancy Harris Homestay, to spend the night. And gosh! The first thing I looked for was an air-conditioner.

The homestay, situated on a hill near enormous Bario farmlands, is run by locals and offers a traditional lifestyle. The facilities are basic. No air-conditioning. So all I had to do was to open the windows and let the cool fresh air in.

Despite that, I was still excited to see the interior. Family portraits are obvious as I entered the hallway. Kelabit artefacts are displayed near a comfy sofa. There are more than 10 rooms, plus a spacious balcony from where we were able to see the sprawling paddy fields. It is highly recommended for those seeking ‘a paradise of tranquillity’.

Leaving our luggage at the homestay, we went to Iskandar Café for refreshing drinks and tasty food before joining the Ministry team to visit several places of mesmerising scenery and monuments — on motorbikes. 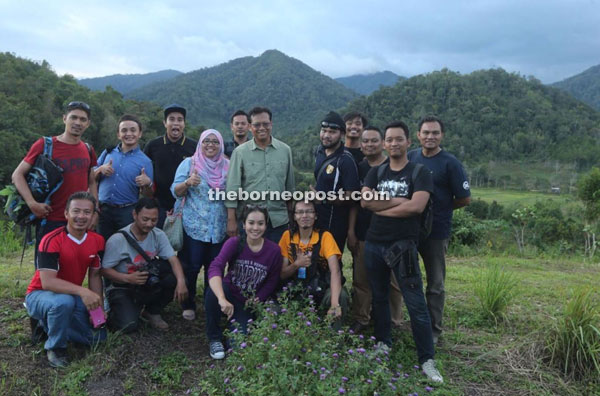 Ahmad Shabery with members of the media after visiting several places of interest in the Highlands.

Besides passing several farmlands, paddy fields, churches, schools and some of the main attractions in the Highlands along the way, we also had the chance to mingle with the villagers and I came to know that some of the Kelabit settlements are still using generators (for electricity) that only start operating close to evening. It is useful for visitors to know there are not many shops in Bario — only cafes — while hotels are non-existent.

However, I was also told Bario is a great place for adventure activities, including jungle trekking, bird watching and kayaking. I was a bit disappointed though for not getting to participate in any of these activities due to time constraint. But on the whole, our group were happy with some fishing and golfing at the home to one of the villagers.

In the evening, we were brought to the Bario community hall for a social gathering known as ‘Majlis Pemimpin Bersama Masyarakat Tani Bario’. We were fortunate to have been able to witness the captivating traditional Kelabit dance. Ahmad Shabery and Deputy Chief Minister Datuk Patinggi Tan Sri Alfred Jabu Numpang sportingly joined the performers on stage and enthralled the audience with their graceful movements to the beats of traditional gongs.

Our dinner was subsequently served complete with traditional Kelabit delicacies, including the ever popular Bario rice and pineapples. After an eventful day, we went back to the homestay for a much needed rest.

During our day-two stay in Bario, we also visited a pineapple farm, owned by Mustapha Radja Sewa Abdullah, and to my surprise, there were buffaloes scattered around the nearby fields, grazing peacefully.

I was told Bario pineapples were succulent and high in nutritional values which help to retain youthfulness and cure several diseases. Honestly, I did not enjoy eating pineapples much before but after having tested the Bario variety, I was hooked. It is definitely an exception to my dislike of pineapples. The Bario pineapples are a must-try.

From the pineapple farm, we moved on to the Bario Immigration Complex for the opening of AgroAgent, a banking facility newly developed here to help the rural communities, especially in terms of financial assistance.

My final day in Bario ended with a first visit to the Bario Asal longhouse of the Kelabit community. We made our entrance from the back or kitchen area (the fire place is located here) which has become a normal practice in the Highlands.

The villagers welcomed us warmly and erupted into a chorus of songs as we entered the hallway. Everyone gathered at the balcony and we had an enjoyable meet-and-greet session with lots of chats and also pictures taken for memoirs.

I was told there are about 6,000 Lun Bawang, Kayan and Kenyah making up the Kelabit people in Bario which shares the Highlands with another popular village —

Ba Kelalan — and two more similar villages —  Long Lellang and Long Seridan. There are about 10 villages with Bario as the ‘capital village’. 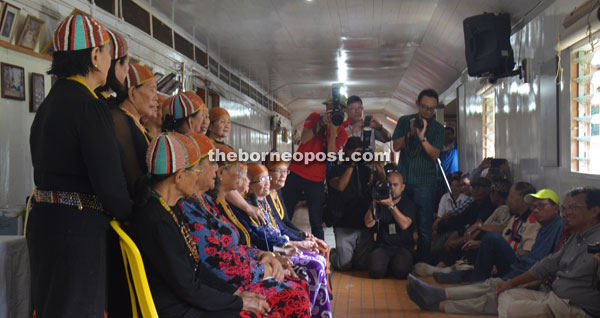 Ahmad Shabery and other visitors being entertained to traditional Kelabit singing during a visit at the Bario Asal longhouse.

There are a total of 15 longhouses in the Kelabit Highlands, seven of which belong to Bario District. The oldest is known as Bario Asal while the rest include Lung Palang, Arur Dalam, Pa’ Ramapoh Atas, Pa’ Ramapoh Bawah, Pa’ Derung, Padang Pasir and Kampung Baru.

Agriculture is the mainstay of the local population who plant Bario rice and pineapples and process Bario mountain salt.

One can also travel to Bario by road, taking about 12 hours from Miri, and soak up the natural beauty of the rainforest and the pristine surroundings during the drive through.

At 1pm on April 4, I was driven to Bario airport for the flight home — from Bario to Miri first, then to Kuching. Although I did not have much time to explore Bario, the trip was an experience of a lifetime.

I look forward to visiting Bario again, especially during the Bario Food Festival — Pesta Nukenen Bario — in July to get up close and personal with the Highlands community and, perhaps, also write an article or two about them.

To me, Bario offers a distinctive lifestyle and culture hardly found elsewhere. Being away from the pell-mell rush of city life allows the local communities to continue practising their traditions and leading relatively stress-free lives. It is a perfect getaway to be close to nature.

I feel very blessed to have been given the opportunity to visit the Highlands that offer something different from what I am used to living in the city.

Apart from its natural beauty and unique agricultural activities, Bario is also known for the warmth and friendliness of its indigenous communities. I will definitely go back again if given the opportunity to experience more than what I had during my recent trip. 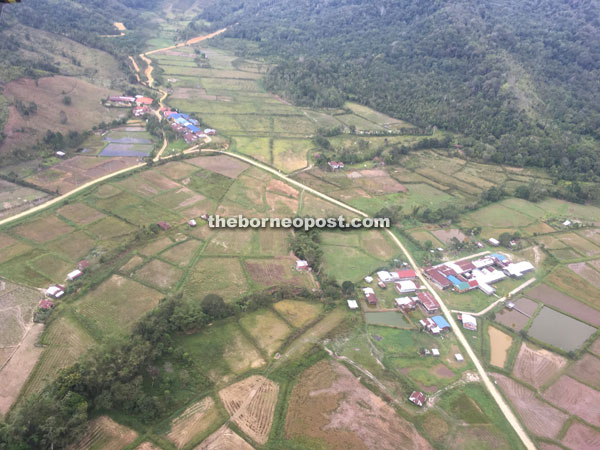