Sunday, September 20
You are at:Home»Features»Community-based assault on urban poverty 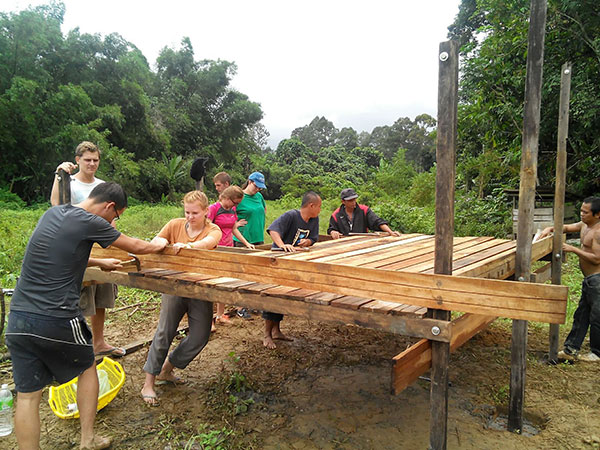 Foreign and local volunteers constructing a house for a disadvantaged family.

TACKLING the problem of urban poverty is a complex challenge.

There are many factors which contribute towards it — amongst them, lack of education and job opportunities, poor health and disabilities, loss of a family breadwinner, all of which limit opportunities for individuals and families to create better socio-economic situations for themselves.

Escaping the cycle of poverty on one’s own is a monumental task, requiring resources and opportunities far beyond  many individual’s means and abilities. More often than not, it requires a concerted effort from the government and the wider community to lend a helping hand to these struggling individuals and families to build and access the resources they need to permanently rise above their circumstances.

Thus, it makes sense for a non-profit non-government organisation called Breakthrough Network Centre Bhd (BT) to look at community-based approaches to help the poor and marginalised in society find a way out of poverty.

BT’s mission is to mobilise the community for the poor in order to produce sustainable and reproducible impact upon communities and the next generation.

The organisation started about eight years ago by constructing houses for the hardcore poor and providing assistance like food, clothing, transport, medical care and temporary shelter. To date, it has helped build over 12 houses as well as repair more than 20 homes and now has about 150 families participating in its regular programmes.

BT is also open to partnering with any organisation or individuals that share the same vision to help the poor, marginalised and the dispossessed regardless of race or religion.

“To fight poverty, there is still plenty of opportunity and potential because here in Sarawak, there are lots of resources such as land and people but networking and bringing them together is the challenge. This is where BT can help,” its chief operations officer Alfred Phua told thesundaypost.

“Our mission statement is mobilising the community for the poor. Community includes everyone — religious institutions, corporate, public, government — everybody.”

As a non-profit organisation, BT relies on public goodwill for volunteers, donations in cash and kind and other resources to carry out its activities. Most of its funding comes from “We Care Fest”, a charity food fair held every two years.

This year, through “We Care Fest 3.0,” BT is aiming to raise RM300,000, a sum which Phua says is necessary to meet the needs of its operations for the next two years which currently encompass five departments — education, natural farming, youth, building and visitation and care.

They are still seeking more sponsors and vendors to be a part of the festival. The organisers hope each stall will be able to contribute a minimum of RM3,000. Phua urged those interested to get in touch (contact details at the end of this article). 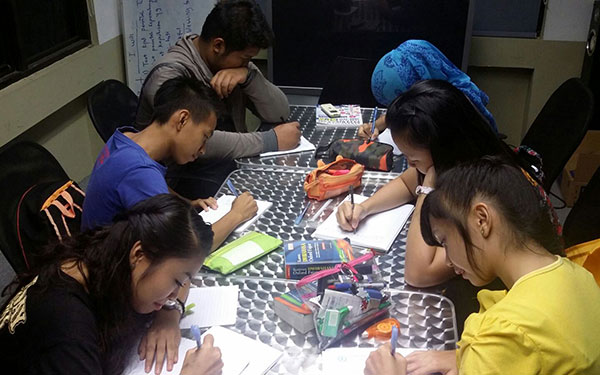 Students completing their assignments during one of the free classes.

Part of the funds raised will go towards setting up a community school for children from disadvantaged families in Kampung Tabuan, Pending, scheduled to begin operating last month (April). The school called D’ Wira 2, is the second such school to be affiliated with BT. It is an off-shoot of D’ Wira 1 located at Swee Joo Park, Sky Garden.

D’ Wira 1 now provides Montessori pre-school studies for some 90 students, half of whom are undocumented children.

D’ Wira 2 was set up to cater to the dozen or so students from the Kampung Tabuan area, already attending D’ Wira 1.

The D’ Wira project was started in 2008 by a couple with backgrounds in teaching and a passion for children, especially from poor, marginalised and dysfunctional families. In addition to providing a safe, learning environment, the project also assists in ferrying the students to school.

Phua said the number of children tended to fluctuate as they followed their parents from place to place in search of work opportunities, adding that the two schools, affiliated to BT, were standalone entities and operated on their own.

“BT provides assistance in the form of finance, and is also helping to kick start the physical aspects of D’ Wira 2. We prefer to partner. We don’t believe in reinventing the wheel. These guys are doing a good job,” he explained.

BT is also affiliated with Meeting Needs Rehab, a volunteer network which focuses on helping the disabled. 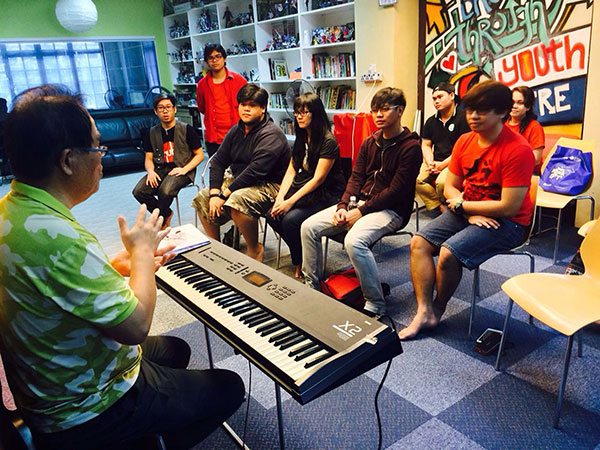 The Hub at MJC offers free music lessons and workshops for urban youth as well as a safe place to hang out.

The organisation’s community-based efforts also include the youth through its youth centre in MJC called The Hub. Open daily from Monday to Saturday (3pm to 11pm), it aims to serve as a safe hangout for youth from the community. The centre organises free tuition and music lessons as well as concerts and talks.

“Youth are more mobile, so they need a safe and clean place where they can hang out, have tuition lessons, learn music and hold their hobby gatherings. At Hub, they can cook, play music and spend time with their friends,” Phua shared.

According to him, there are presently about a dozen attending tuition classes while overall numbers fluctuate according to school and college semesters. Weekends are usually the peak times, attracting up to 20 to 30 people at any one time.

“The numbers are higher whenever we organise activities like concerts, movie screenings, talks and seminars, and culture exchanges with volunteers from other states or overseas,” he said, adding that they hoped to organise a youth concert later this year.

Phua also highlighted the organisation’s natural farming programme set up in 2013 to help participants grow crops for their own consumption and/or sell for income.

Initially, there were about a dozen families taking part in the first phase of the programme but about half dropped out later. Phua acknowledged there were some shortcomings in how the programme was implemented.

“Not all eligible candidates are keen or passionate about farming. They would rather do something else. Farming is hard work. Rain or shine, you still have to go out there and work. The other thing was BT was still fairly young, and our staff turnover was relatively high.

“But now, we feel we have found staff who are mature, have the necessary knowledge and are passionate about working in the community. That’s why we can now step up from cash crops to poultry and from individual to community-based,” he said.

Last year, BT partnered with PDK Mambong (a community-based rehabilitation centre for the differently-abled (OKU) under the state Welfare Department) to start a chilli farm which, to date, has generated about 100kg of chillies.

“The farming project is basically a partnership. They provide the land and the manpower in the form of their staff and students. We provide the training and advance them the money to build up their resources, such as nettings. We also give them free compost and training. We have full-time personnel supervising this project as well as all our other natural farming projects,” Phua said.

“I am excited about this project because there are two direct benefits. They provide the land and manpower. The students are OKU who are physically able to work in the programme and by engaging them to work, they receive an increase in their government grant. OKU receive about RM200 but by working they can double it to RM400.

“Secondly, the proceeds from whatever they produce will go back to the centre. This is very exciting. They started with chilli, a high-value cash crop, and now we are stepping into poultry. If this programme is successful, then we will expand it. Our goal is to eventually move into integrated farming on the land provided, including fishery” he said, adding that BT was in discussion with the Sentosa Hospital to start a similar programme. 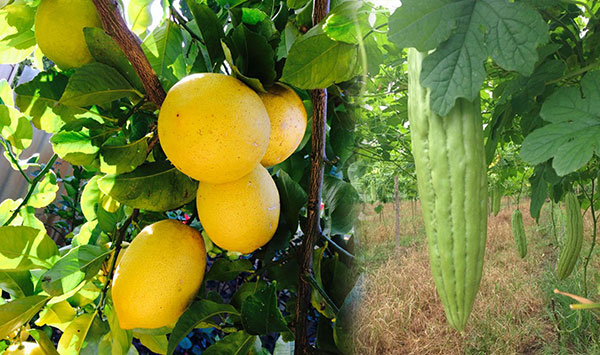 Some of the results of the natural farming methods.

The programme with PDK Mambong now has eight students working on the farm, supervised by staff from the centre and assisted by BT personnel. BT provides training and advice such as how to grow certain crops and make natural fertilisers and pesticides.

Phua estimated proceeds from the farm would benefit about 150 families, directly and indirectly.

“We hope to extend the programme to other PDKs. However, we will not rush because selection of candidates is really crucial — together with hard work and discipline.

“We still face the challenge of being consistent. The projects may kick off well but maintaining them is also a challenge.

Everyone involved must be in it for the long-haul,” he emphasised.

On a smaller scale, BT also has a natural farming programme called “Food Always In The House” or FAITH, aimed at urban dwellers wishing to grow their own produce for their own use or to supplement their income.

We Care Fest 3.0 will be held on May 2 (Monday — public holiday) at Chung Hua Primary School No. 3 Auditorium from 7.30am to 12.30pm. Volunteers and organisations can set up stalls.

For more information about BT and how to get involved in their programmes, visit www.breakthrough.org.my or their Facebook page.