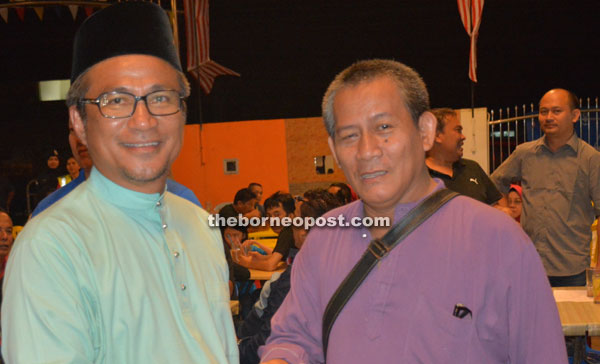 SIBU: BN candidate for Nangka, Dr Annuar Rapaee hopes to convince the government to construct some 1,000 housing units in Sibu under the 1Malaysia People’s Housing (PR1MA) programme to enable more townsfolk to own a house.

“I will try my best to convince the government to have 1,000 affordable homes in Sibu,” he said during a political talk at Malay Union Club (MUC) hall here on Thursday night.

He said ensuring comfortable living was among his core focus for the constituency in the next five years.

According to Dr Annuar, some 2,000 land lots would be available to help ease congestion in the villages where several extended families lived under one roof in some houses.

To start with, phase 1 of Kemuyang project comprised 413 lots, while another 427 lots for the second phase, making a total of 840 lots.

“It will be a mixed development comprising residential and commercial areas. The new township will be equipped with the necessary infrastructure and amenities,” he said.

He said another 400 acres near Sibu Jaya had been approved, bringing the total land lots approved to be over 2,000 lots.

Kampung Hijrah here  would be an in-situ resettlement, requiring some realignment but the villagers were not required to move out from the place.

On infrastructure, he said about RM15 million had been utilised for upgrading and improving roads in villages and the 32 houses in the constituency over the last five years.

He recalled that prior to the tarring of roads, visiting the longhouses proved quite a challenge due to the road condition then.

An-Nur Mosque had undergone a major renovation costing more than RM5 million to make it more spacious and comfortable.

As for entrepreneurship, Dr Annuar was committed to helping small-time traders improve their household income and in the next five years, he would focus on helping shape the younger generation into entrepreneurs.

About RM160,000 in the form of equipment had been approved for youths wanting to set up workshop and car wash business.

Dr Annuar said he had helped traders including roadside hawkers improve their business by providing them with equipment.

On education, he said free tuition had yielded results with pupils in SK Abang Ali scoring straight As in the UPSR.

“In the 12-week programme, students can study in a university environment at UCTS here under the guidance of teachers,” he said.