Wednesday, January 26
You are at:Home»World»Rescuers search for trapped residents 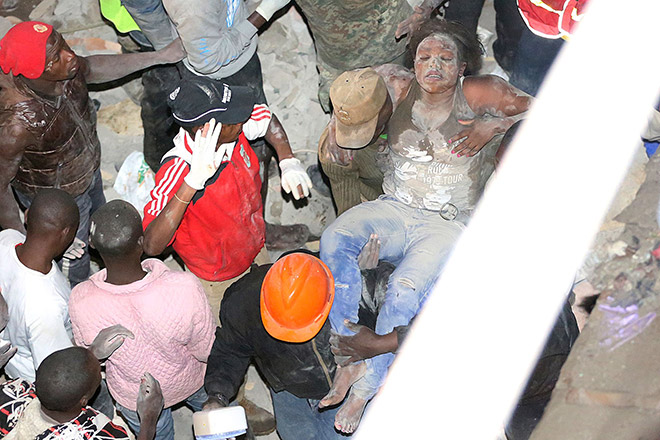 Emergency personnel rescue a woman from a collapsed building in Nairobi. — AFP photo

NAIROBI: Rescue workers searched yesterday for more residents feared trapped in the rubble of a six-storey building that collapsed in Nairobi after days of heavy rain, killing at least seven people.

President Uhuru Kenyatta visited the site of the building in a poor Nairobi suburb, his spokesman said. Lower floors of the building had crumpled late on Friday, leaving some of the top storey almost intact.

An official said many buildings in the area had been erected without official permission, raising fears of further collapses.    It was not immediately clear how many people were trapped or killed under the building rubble in Nairobi’s Huruma district, though the regional police chief said seven people were confirmed dead.

Police, who kept back crowds from the site, said 121 people had been rescued and taken to hospital. At least 10 ambulances were on standby at the scene, a witness said.

Crowds cheered overnight as one casualty was hauled out of the broken masonry and carried away by stretcher. The Kenya Red Cross issued a telephone hotline to report any missing people.

“It is raining, and these houses were built without Nairobi County authorisation. I am asking residents in the area to leave. In the area where this one collapsed there are 189 houses,” Jonathan Mueke, deputy governor of Nairobi County, told privately-owned QTV station.

Rescue workers with the help of residents dug through the rubble, where bed frames with sheet covered mattresses protruded from the crushed concrete.

Kenyan Red Cross said on its Twitter feed late on Friday that people from 150 households were taking shelter in a nearby village. — Reuters