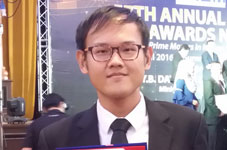 Chai showing the medal he received at the award ceremony.

Electrical and electronics engineering undergraduate Matthew Chain Min Inn, who scored a 4.0 CGPA in his final semester in December last year, was presented with the award during the IEM’s 57th Annual Dinner and Awards Night in Petaling Jaya, Selangor recently.

The 22-year-old from Kuching is due to graduate in October.

His final year research project, which utilises a camera to quantify turbidity in bodies of still water such as lakes and reservoirs, had also impressed the Swinburne Sarawak Research Centre for Sustainable Technologies that it presented him with its Outstanding Achievement Award.

Besides his studies, Chai also involved himself in other interests. Last year, he competed in the Innovate Malaysia Design Competition and Microsoft’s Imagine Cup. The former is a multi-discipline engineering design competition while the Imagine Cup is a prestigious student technology competition that brings together student innovators from all over the world.

Chai was the Swinburne Sarawak Institute of Engineering and Technology (IET) On Campus vice-president for 2014/2015 and was awarded the IET Leadership Award for 2013/2014.

The former SMK Sungai Maong student was surprised when he learned he was due to receive the IEM Gold Award.

“I was not aware IEM rewarded engineering students for academic performance. Being recognised for four years of hard work is definitely very fulfilling,” he said, adding that his owed his success to his family, especially his father.

“My father showed me that hard work will get you through any obstacle. He was able to pursue a master’s degree followed by a PhD at the University of Copenhagen even though he did not have a good grasp of English when he started,” Chai said.

Currently participating in Innovate Malaysia 2016, he is still deciding between pursuing postgraduate studies and getting a job.

“I would love to go for postgraduate studies because researchers are the ones changing the world through discovery and improvement. I want to be a part of that. But I am also anxious to embark on a career that is challenging and allows me to keep learning.”

He opines that students who want to score well should enjoy what they do.

“Learn to love the process of learning. With a positive mindset you’ll pick up information much quicker. Understand the concepts that are taught and apply them in the appropriate context. By understanding them, you are prepared for anything.”

“Students who aspire to go into engineering should build up their network and it is also helpful to take part in at least one competition to get the exposure and experience of competitive learning,” Chai said, adding that university life is not all about getting good marks.

For Chai, a university degree is not only about the results but rather “It is the process which moulds and shapes the way you think”.

The Institute of Engineers Malaysia was established as a body for professional engineers and also a professional learned society serving more than 16,000 members in Malaysia, abroad and the communities in which they work.