Sunday, January 29
You are at:Home»News»Sarawak»Voters know the difference between BN and Independent candidates – Wong
For the freshest news, join The Borneo Post's Telegram Channel and The Borneo Post on Newswav. 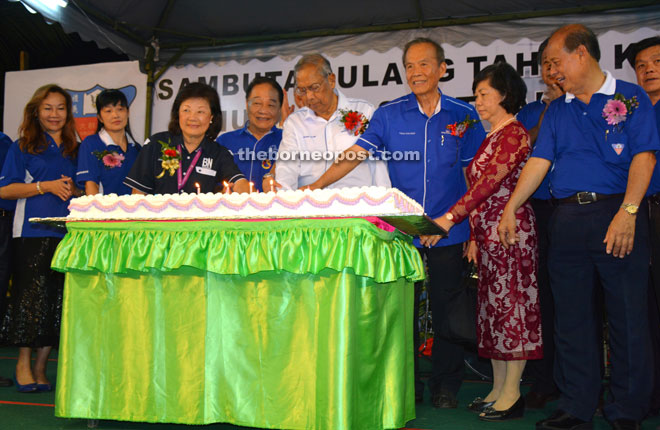 Adenan (fifth left) cuts an anniversary cake together with from (third left) direct BN candidate for Pelawan Datuk Janet Lau, Wong, chairman of the school board Datuk Tiong Thai King and others.

“I did tell the people that Watson Bangau is an Independent candidate, but what can he do even if he gets elected.

“So, I think on a whole, Bumiputera voters in Bawang Assan probably will know the difference between BN and Independent candidates,” Wong, who is Second Finance Minister and Minister of Local Government and Community Development, said when met during SJK Thai Kwang’s 85th anniversary celebration here Saturday.

Wong was asked whether Watson, an Iban contesting in the election, could reduce Bumiputera votes for BN in the constituency.

“Perhaps, yes, why not. He comes from there (Bawang Assan); he was once the chairman of PBB Bawang Assan and also once a political secretary to the chief minister.

“I would expect him to get some votes at my expense, of course.”

PBB secretary-general Datuk Stephen Rundi has said that PBB was throwing its full weight behind Wong to drum up Bumiputeras’ support for him.

Watson took political pundits by surprise by contesting in Bawang Assan, taking on heavy weight Wong, who is direct BN candidate for the constituency, along with DAP’s Stanley Chiew, STAR’s Wong Sing Wei and another Independent candidate Yeu Bang Keng, also known as Ben Kor, who claimed to have support from the S4S members.

For his part, PBB gave Watson an immediate sacking from the party.

Meanwhile, Adenan in his speech earlier, said he had spoken to Prime Minister Datuk Seri Najib Tun Razak on granting full recognition of Unified Examination Certificate (UEC), and was informed that the curriculum had to undergo some adjustments, namely history and Bahasa Malaysia.

“It is matter of changing the requirement, he (Adenan) said. Actually, the requirements are very simple, firstly, change the syllabus to become Malaysian-oriented syllabus. Otherwise, there is too much emphasis on China and so.

He hoped that Zong Dong headed by Temenggong Datuk Vincent Lau could successfully negotiate with the Ministry of Education for the compete recognition of UEC nationwide.

Wong added that back in 2010, he requested for a RM5 million grant for Chinese Independent School and Najib gave it.

He said at that time he had already discussed with Najib about the recognition of UEC.

“At that time, he (Najib) stated two conditions to be met before the ministry was prepared to recognise UEC, namely the change of syllabus to become more Malaysian and secondly a credit in Bahasa Malaysia,” Wong said.