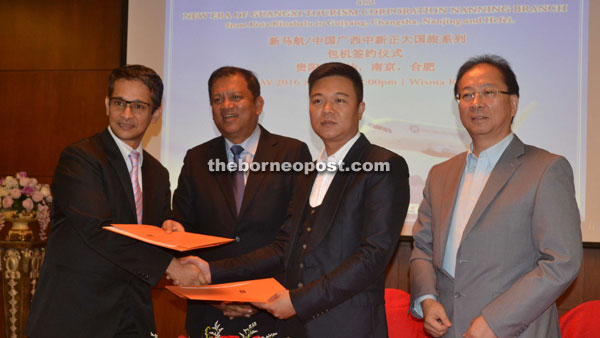 Joniston (second left) witnessing the exchange of MoA between Proteek (left) and Li while Liaw (right) looks on.

KOTA KINABALU: Sabah is expected to receive close to 15,000 tourists from China via direct charter flight between July and August this year, who will bring in RM30 million in tourism receipts for the State.

Liaw said the China tourists would generate tourism receipts of some RM30 million in the two months alone – RM16 million from food and accommodation and RM14 million from tourists’ spendings.

“Hefei is a new destination for Kota Kinabalu. We have never flown direct to Hefei before,” he said.

Liaw, who is also the managing director of Airworld Travel and Tours Sdn Bhd, said his company has been in the charter flight business for 16 years since 2000.

“At that time, the charter flight services were dominated by China airlines – China Eastern or China Southern.”

Between 2010 to 2014/5, Liaw said, Airworld Travel and Tours engaged Malaysia Airlines to provide ad hoc charter flight services during peak seasons such as Chinese New Year or National Day of China, when the number of passengers from both countries were more feasible.

Liaw said, some perceived that Sabah lacked hotel rooms, especially in three to four stars hotels, but he opined that the shortages in hotel rooms only occur during peak seasons like July and August.

“The development will have facilities such as nightlife, shopping, food street, spa centre, river cruise and water sports. This will ease the shortage of rooms in Sabah,” he said.

In answering a question posed by the media, Li said Sabah, Bali and Bangkok each has its own uniqueness. However, Bangkok, or Thailand in general, has more developed tourism facilities such as hotels, while the tourism players in that country were also more experienced.

“The environment and people in Sabah are not bad. But Sabah still lags far behind in tourism facilities compared to Thailand.”

Adding to what Li has said, Liaw stressed that the tourism facilities and natural scenery in Sabah was a different grade from Phuket, Thailand.

“Phuket is too commercialized and its natural beauty is nothing compared to Sabah. The water in Phuket is muddy, while in Sabah, we have crystal clear waters.”

Previous ArticlePolice, City Hall to go after illegals in Inanam
Next Article Some politics is local