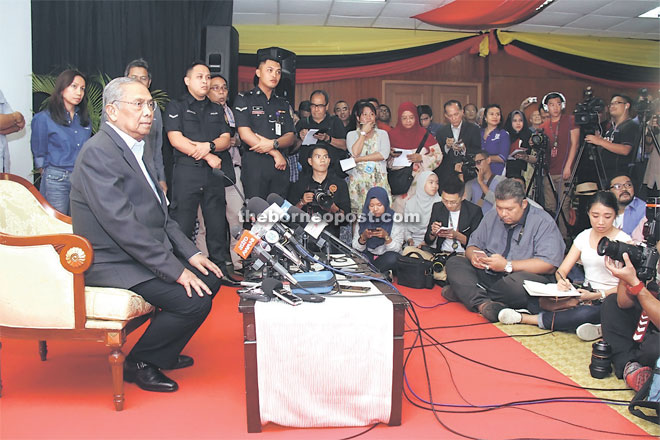 Adenan fields questions from the media.

KUCHING: The implementation of Goods and Services Tax (GST) has enabled better management of the nation’s economy to become more resilient, despite the uncertain global market over the past year.

He has mentioned before that the reformation of country’s taxation system had allowed the government to solve several issues such as illicit money outflow and mitigate over dependence on commodity prices exposed to wild fluctuations.

The state Barisan Nasional (BN) chairman was taking a swipe at the opposition for its strong criticism towards GST. He said the opposition had blamed the implementation of the GST for the rising cost of living. In this regards, Adenan said the opposition had failed to mention that the new taxation system had enabled the government to reduce corporate taxes and personal income taxes including abolishing the sales tax and service tax.

“Most countries in the world have adopted the GST system for so many years and they can’t possibly be wrong. I don’t think Malaysia can be an exception to the rule. We could have adopted this thing (GST) years ago.

“The fact that our economy remains resilient in spite of the global recession goes to show that we can manage our economy better under GST,” he told reporters during a media dialogue at the old State Legislative Assembly (DUN) building here yesterday.

Adenan reiterated that the opposition had promised to abolish GST in Selangor and Penang, knowing that PKR and DAP could not implement such policy because they were not the federal government. The chief minister likened this to making empty promises.

“The opposition can’t abolish the GST unless they take over the federal government. But please be patient, it is still two years down the road, not now. This is just another misleading statement.”

Previously, the chief minister had challenged PKR-led Selangor and DAP-led Penang to abolish GST before trying to sell the idea to the people of Sarawak.

Adenan also chided the opposition’s comparison on the rural development initiatives between Sarawak and the opposition-ruled Penang and Selangor. Considering the vast development in the two states, he sarcastically asked where the areas which were considered rural there.

This election is the 11th for Adenan who is seeking a third term as Tanjung Datu assemblyman. Adenan was Muara Tuang assemblyman from 1978 till 2006. He has also served as Batang Sadong MP for one term.