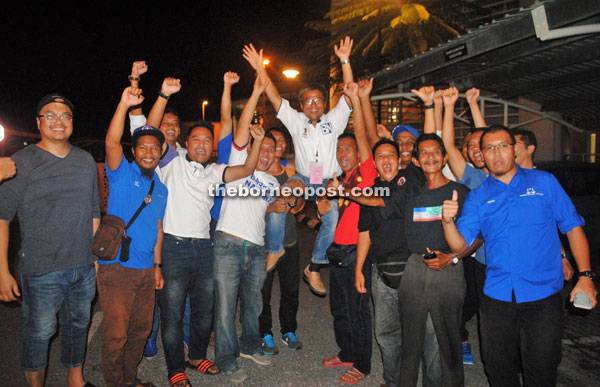 Dr Annuar and his supporters celebrate the win.

SIBU: BN-PBB candidate for Nangka Dr Annuar Rapaee was hugged by his wife Dr Haniza Zainal Abidin and parents Rapaee Tarip and Fatimah Othman when it was announced that his majority win was huge – 7,617 votes.

It is an improvement by 2,315 votes when compared to his majority in the last state election.

Voter turnout was 67.8 per cent while there were 186 spoilt votes.

Nangka has 18,605 registered voters. In his victory speech, Dr Annuar thanked party workers for their hard work and voters for giving him another five-year term.

He attributed his big majority win to the strong PBB machinery and also help from other BN component parties – SUPP, PRS and SPDP, which he said all worked very hard, particularly in the Chinese areas.

“We won three out of five Chinese areas this time around,” he said.