Monday, May 25
You are at:Home»News»Election News»Henry to work with opposition camps for good of Tasik Biru 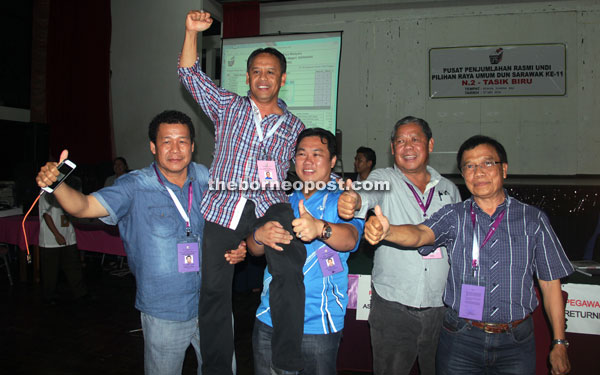 Henry (second left) gets lifted by his supporters after he was announced the winner. Also in the photo are (from right) PBB Tasik Biru chief John Nyigor and Mas Gading MP Anthony Nogeh Gumbek, who is also SPDP secretary-general.

BAU: Newly-elected Tasik Biru assemblyman Dato Henry Harry Jinep has vowed to work together and close ranks with opposition supporters and voters for the betterment of the constituency.

Henry (BN-SPDP) won the seat by 1,288 vote-majority, after garnering 6,922 votes against the 5,634 votes obtained by his opponent Mordi Bimol from DAP in a straight fight for this Bidayuh-majority seat.

While thanking BN supporters for helping to deliver the seat for the coalition, he commended Mordi for the tough fight and he also respected the decision made by the voters.

“I want to say ‘well done’ to Mordi. To the campaigners and supporters from both BN and opposition, I apologise for any shortcomings or things said which might hurt each other during campaigning. It’s over now, let’s work together for the rakyat.

“Let’s move forward. This is the process of democracy. We have to respect the choice made by the voters,” he told reporters after the announcement of result by returning officer Inting Nyami at the vote tallying centre in Bau Civic Centre last night.

Henry, who is the new face introduced by BN component Sarawak Progressive Democratic Party, also expressed his gratitude to the Chinese voters who are now slowly coming back to support BN.

He said this was the case in Musi, located near his village Kampung Tanjong, where BN won many votes although it had not been an easy one for the BN in past elections.

“I also did not lose many votes in other Chinese areas. Thank you to the Chinese voters, I believe they would like me to bring more development to Tasik Biru,” he said.

Meanwhile, Mordi though disappointed with the result was nonetheless happy with the party’s ability to gain more votes from the Bidayuh community.

He said this would not be the end of his political journey in Tasik Biru or Mas Gading parliamentary constituency, and he vowed to come back to contest again in the coming elections. Mordi also contested and lost in Mas Gading in the 2013 general election.

In the 2011 state election, former assemblyman Datuk Peter Nansian from BN won the seat by 2,072 vote majority in a three-cornered fight.