Saturday, August 20
You are at:Home»World»North Korea’s Kim says will not use nuclear arms unless threatened 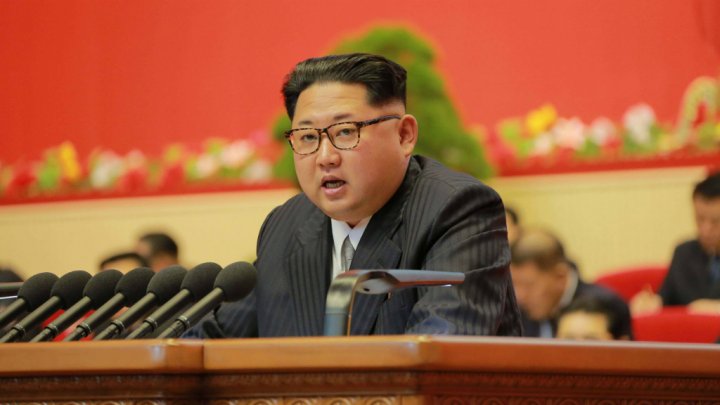 PYONGYANG: North Korean leader Kim Jong Un said his country will not use nuclear weapons unless its sovereignty is infringed by others with nuclear arms, and is willing to normalize ties with states that had been hostile towards it, state media said on Sunday.

Isolated North Korea has made similar statements in the past, although it has also frequently threatened to attack the United States and South Korea, and has defied United Nations resolutions in its pursuit of nuclear weapons.

The North “will faithfully fulfill its obligation for non-proliferation and strive for the global denuclearization,” Kim said in a report to a rare congress of the ruling Workers’ Party (WPK) that opened on Friday, the KCNA news agency reported.

The first congress in 36 years began amid anticipation by the South Korean government and experts that the young third-generation leader would use it to further consolidate power. Kim became leader in 2011 after his father’s sudden death.

On Sunday morning, foreign journalists were told to dress presentably and were brought to the People’s Palace of Culture, where dozens of black Mercedes-Benz E-class sedans, with the 727 number plates reserved for the highest government officials, were parked.

However, after a one-hour wait in a lobby outside large wooden doors with frosted glass, the journalists were taken back to their hotel without having met any officials.
While the North Korean capital has been tidied-up as part of a 70-day campaign of intensified labour ahead of the congress, the 128 members of the foreign media invited to Pyongyang to cover the event had yet to be granted access to the proceedings.

Although Kim’s economic plan was short on details, Michael Madden, an expert on the North Korean leadership, said it was significant that Kim had set out an economic plan at all.

“In stark contrast to his father, he is publicly taking responsibility for the economy and development as the originator of the policy. His father never undertook that responsibility,” Madden said.

“As a responsible nuclear weapons state, our Republic will not use a nuclear weapon unless its sovereignty is encroached upon by any aggressive hostile forces with nukes,” KCNA quoted Kim as saying on the second day of the meeting on Saturday.

“The WPK and the DPRK government will improve and normalize the relations with those countries which respect the sovereignty of the DPRK and are friendly towards it, though they had been hostile toward it in the past,” KCNA quoted Kim as saying.

DPRK is short for the North’s official name, the Democratic People’s Republic of Korea.

Kim, 33, also called for improved ties with the rival South by erasing misunderstanding and mistrust, although he has made similar proposals in the past that led to talks by government officials that made little progress.

The two Koreas remain in a technical state of war since their 1950-53 conflict ended in a truce, not a peace treaty, and relations have been at a low since the North’s January nuclear test, its fourth.

North Korea came under toughened new U.N. sanctions in March after its most recent nuclear test and the launch of a long-range rocket that put an object into space orbit in defiance of past Security Council resolutions.

Since then, it has continued to engage in nuclear and missile development activities and claimed that it had succeeded in miniaturizing a nuclear warhead and launching a submarine-based ballistic missile.

In March, Kim said the North would soon test a nuclear warhead, and South Korea has said Pyongyang may conduct its fifth nuclear test in conjunction with the party congress. – Reuters