Monday, January 30
You are at:Home»BPOnline»Moving towards green economy in the Heart of Borneo
For the freshest news, join The Borneo Post's Telegram Channel and The Borneo Post on Newswav. 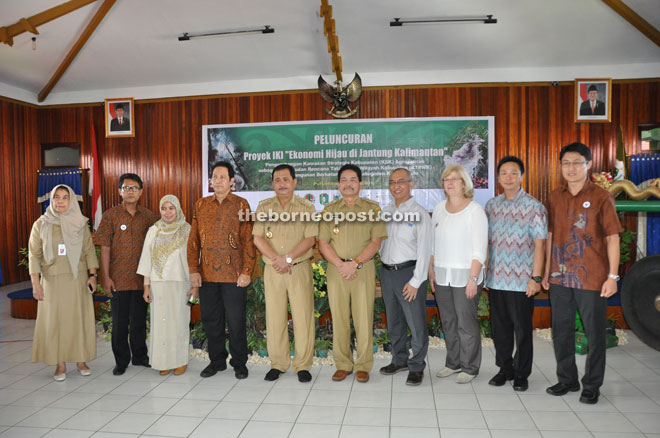 PUTUSSIBAU, Kalimantan, Indonesia: A wide range of stakeholders comprising the government and private sectors, civil societies and academia from Indonesia and Malaysia converged here recently in a meeting to mark the beginning of a new trans-boundary conservation project, Green Economy in the Heart of Borneo (HoB).

Held at Kapuas Hulu District Office on April 20, the half-day meeting was declared open by its district chief (Bupati) AM Nasir who welcomed the project, saying it was in line with the district’s conservation strategy that promotes balance in ecology, economy and social development in the area.

“The project is very strategic because it supports the implementation of our commitment as a Conservation District launched in October 2003, so that the region and its natural resources can still provide the functions of ecological, economic and social balance,” he said.

He said a similar kick-off event would be held in Sarawak to obtain the commitment of the state government and other stakeholders to the project.

The meeting also saw the signing of a memorandum of understanding between the government of Kapuas Hulu and WWF-Indonesia which aimed at, among others, strengthening the commitment of both parties in supporting the project implementation.

A two million hectare site, spanning northern West Kalimantan to southwest Sarawak, has been identified for this HoB Trans-boundary Corridor project, funded by the International Climate Initiative of the Federal Ministry of the Environment, Nature Conservation, Building and Nuclear Safety of Germany.

The project is initiated by WWF-Germany, WWF-Malaysia and WWF-Indonesia, and it is hoped the governments of Indonesia and Malaysia will be the main drivers of the project.

The corridor project aims at developing a green economy management concept that promotes environmentally-friendly resource use and production within the trans-boundary HoB Corridor for West Kalimantan and Sarawak.

It is expected to generate economic, social and environmental benefits to mankind and nature.

This project contributes to all the five pillars under the HoB Strategic Plan of Action as endorsed by the Malaysian and Indonesian governments.

Thus, this project will demonstrate how sustainable economic development can be integrated with conservation.

This project is situated within the HoB Corridor initiative that aims at creating an ecological connectivity between protected areas and different land uses that spans Brunei, Sabah and Sarawak, and four Indonesian provinces of West, Central, East and North Kalimantan.